The bekabune, sometimes referred to simply as a beka, is a small, one person, flat-bottomed boat used for gathering seaweed. In the city of Urayasu, which was once on Tokyo Bay until landfill projects left it far from shore, there were two types of bekabune used. A smaller one, sometimes called a noribeka, that was used strictly for gathering seaweed, and a slightly large oner which was also used for catching shellfish. Large numbers of these boats operated out of Urayasu, while similar boats operated out of the rival port to the west at Ōta.

Many of these boats were designed to allow the use of a mast with a single spritsail. Others, which I believe were expected to be towed or carried aboard the large net fishing Utasebune, were only designed to be paddled.

At one time, large numbers of bekabune operated out of Urayasu on Tokyo Bay. Photo courtesy of the Urayasu City Regional Museum.

Boats equipped for sailing had a larger omote no funabari (オモテノフナバリ), or forward beam, with a hole cut for stepping the mast. They also had a thicker toko (トコ) or transom beam, which had a cut-out for a rudder. 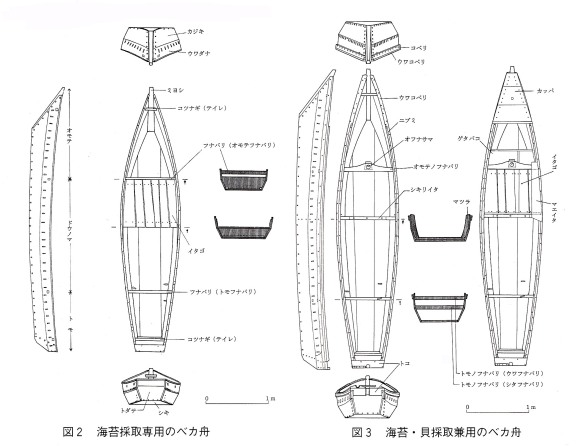 Small bekabune, or noribeka, used for seaweed harvesting, shown on the left. The larger bekabune on the right was also used for shell fishing and showed up after WWII. Image courtesy of the Urayasu-City Regional Museum.

One of the features of the Urayasu bekabune was the flush planking, which is not characteristic of most Japanese boats. In most cases, the upper hull planks, the uwadana (ウワダナ), overlap the lower planks, the kajiki (カジキ), slightly. But, this would cause the boats to hang up on the narrow rows of seaweed. The flush seam between the planks on the bekabune is called the nokke (ノッケ).

Interestingly enough, when I visited Toba, I found a noribeka there. I realized some time later that it didn’t have the nokke of the Urayasu bekabune. It’s upper planking overlapped the lower planking as with most Japanese boats. 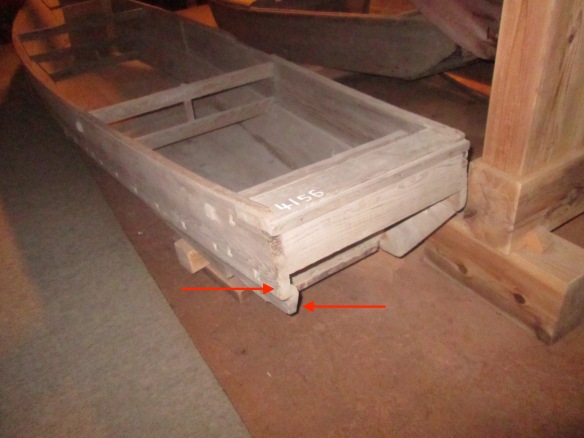 Note the overlap of the upper plank over the edge of the lower plank.

I don’t know any details of other bekabune, but I can say that the Urayasu bekabune were often fitted with work platforms that allowed the worker to sit or kneel a couple inches off the bottom of the boat. These platforms, called itago (イタゴ), appear to allow water to drip down to the bottom of the boat, keeping the operator dry.

I wasn’t aware of these itago until the curator at the Urayasu museum showed them to me. These platforms could be added to each section of the boat, but apparently, it was common to use just one in the center, where the worker sat or knelt.

Though I didn’t see them here, I’ve also seen models and photos of boats equipped with one or two bulkheads, spanning the width of the boat. I don’t know if these are permanent or temporary, or their purpose. I imagine they may have something to do with keeping the wet, harvested seaweed out of the workspace. 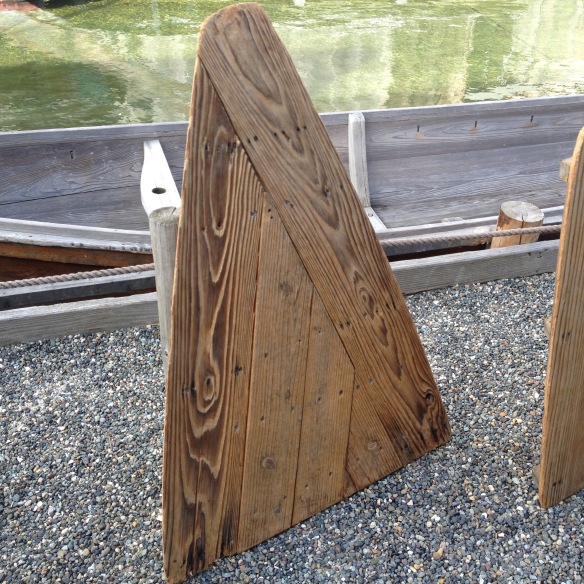 You may have noticed that many of these platforms have small triangular notches in their edges. These are thumb holes to make it easier to lift the panels up. Also note the upper forward beam, or funabari (フナバリ), which has a hole for the fitting of a mast. Boats so equipped commonly have a hole cut in the transom beam, or toko (トコ), for a rudder. This boat, interestingly enough, does not. How was it steered? I have no idea. Perhaps the builder changed his mind when constructing the boat, or put in the larger forward funabari out of habit or just in case. Or, perhaps the toko isn’t the original. It doesn’t make much of a difference in this particular case, as I believe this was built as a museum boat. 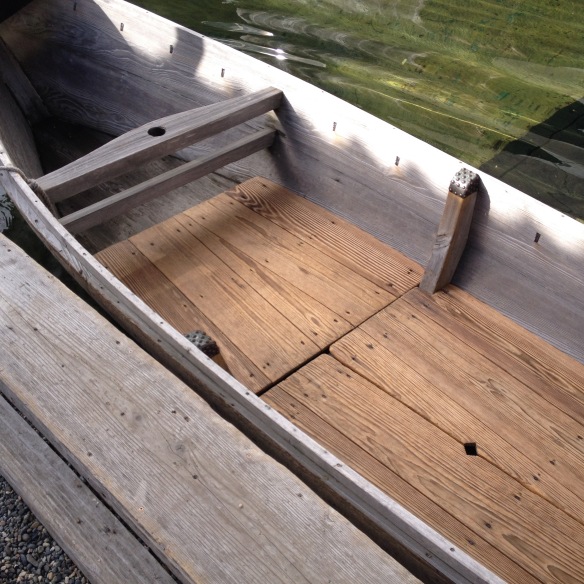 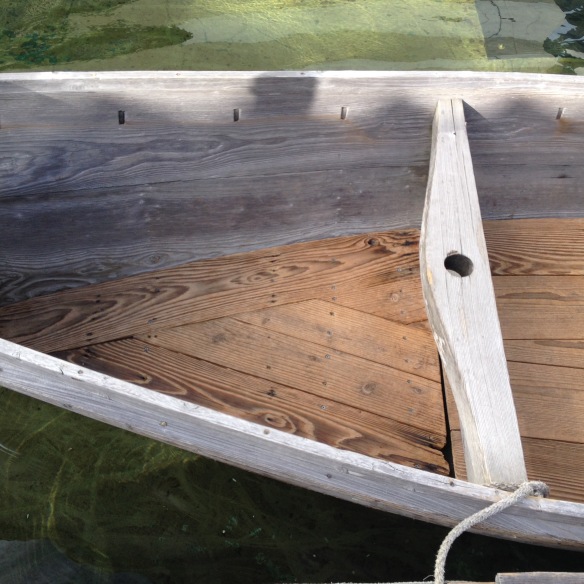 In addition to the work platforms on the floor of the boat, there was commonly a removable platform that was attached to the inside edge of the hull that allowed the worker to lean over the side of the boat, without haven’t to rest on the hard, narrow edge of the hull. This platform was called a maeita (マエイタ). I didn’t see this in the boats I looked at in the museum, but they appear in drawings and photos, like the one below.

Working in the seaweed field with elbows resting on the maeita. Photo courtesy of the Urayasu-City Regional Museum.

There was one other bekabune that I know of at the museum, but didn’t get a good look at it. I got a bit distracted once I met some of the museum volunteers and the curator, who spoke some english. The other boat was on display, directly across from the entrance, as you walk into the museum. I really wish I had taken a closer look at the boat.

Bekabune on display in the museum entrance.

I wrote up more about the visit with the modelers on a post I wrote for the Hyde Street Pier Model Shipwrights here: https://hspms.org/2016/09/09/clare-hess-discovers-hspms-parallel-in-japan/. But, in short, there were a number of bekabune and other models they had built. These were somewhat crude by ship modeler standards, but they were dimensionally correct, mostly in 1/10 scale.

During the visit, the curator, Mr. Shimamura, had stopped by the workshop to deliver a new saw blade to the lead volunteer. He spoke some english, so he explained some of the features of the bekabune. Luckily, having studied Douglas Brooks’s work, I knew about these already and even had a couple photos of my model in progress to show.

As I was leaving, Mr. Shimamura made sure I got a couple pamphlets on the boats of Urayasu, some of that information I am posting here, and then brought out a paper bag and led me outside, where he gave me one of the volunteer-built models of a bekabune.

If you are interested in visiting the Urayasu Museum, the address is: 1 Chome-2-7 Nekozane, Urayasu, Chiba Prefecture 279-0004, Japan 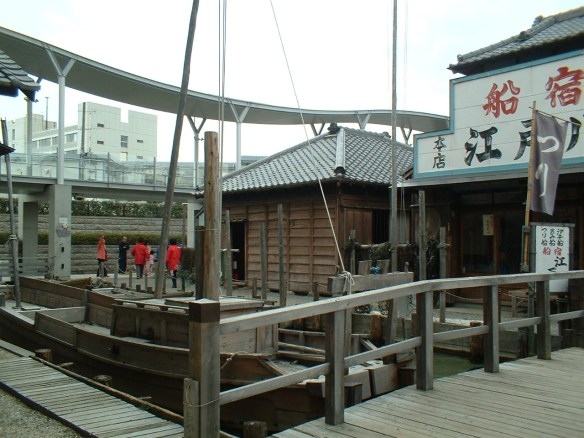 For more information on bekabune, I strongly recommend reading Douglas Brooks’s, Japanese Wooden Boatbuilding. In it, he goes into a lot of detail about his apprenticeship with his teacher, Mr. Udagawa. The boat that they built, the one featured in this book, was the larger bekabune. A full set of boatbuilding plans are available from the author, but he went through a lot of trouble to record the dimensions and to create the drawings, so don’t expect them to be cheap. However, there should be enough information in the book to model a decent model of a bekabune, but it requires quite a bit of study. Ω