Last year, I built a model of a simple Niigata riverboat based on the one built by Douglas Brooks and Nina Noah with Japanese boatbuilder Mr. Nakaichi Nakagawa in the Fall of 2019. That model was a 1/10-scale version of the 25-foot boat.

The actual Niigata Honryousen in the workshop. Photo courtesy of Douglas Brooks.

That model was actually a commission, though I priced it really cheap to help support the project. At the same time, I figured I’d build a second one for myself. Both models were effectively at the same stage when I shipped the one off to its new owner. The other one I kept for my wasen model displays, and so that I’d have something to show at home.

Then, COVID struck, all display opportunities ended, and I had models in my house without enough room to display them. As I really owed Douglas a gift of thanks for all the help he’s provided me, I thought this would be the perfect present.

This past week, I’ve been generally emerging from my modeling building slump, and I had finished off another old project, make leaps of progress on at least one other project, and it seemed the time had come to add some extra detailing to the Honryou model before I send it out.

What you may notice on the actual Honryou, is that there are a couple ringbolts, one at each end of the boat. Plus, if you look closely, you’ll notice there are mortises in those blocks at the ends, and bolts that are visible under the bow and transom. I decided to add that detail. In addition, I needed to make a new kai, or paddle for it.

Yesterday, I finally got it in gear and did the metalwork for the ringbolts, or kan, as I recall from my Japanese taiko drumming and drum-making days, and that backing plate, whose name I can’t recall. I cut a square piece out of a sheet of brass and drilled holes at the corners for nails, and larger hole in the center for the ringbolt itself. The ringbolt parts, I made from 18-gauge copper wire, while the nails were brass nails I had on hand. These metal parts, I blackened using a metal toner. But, I ended up painting them anyway, as I thought the finish might be more durable during the assembly process.

The model requires two sets of these, which I was able to make in an unexpectedly short time. Fixing them into place ended up being pretty straight forward, though I found I had to enlarge the nail holes. I predrilled the wood for the nails, to make the mounting process as easy as possible, and glued the parts into place with tiny amounts of gap-filling CA glue.

With the ringbolts in place, I also cut fake mortises in the end blocks and added blackened nails in the underside to simulate the bolts used on the actual boat. With that done, I turned to the kai, the T-handled paddle, that I had started months ago, but never finished. It actually didn’t take much work, as the hard part of shaping the paddle from a single piece of wood was already done. Basically, I had to finish the shaping the add the T-handle.

For the paddle material, I wanted to use a different wood. The boat itself is made of sugi, or Japanese cedar. I considered using hinoki, or Japanese cypress, which I managed to get a supply of before COVID hit, but I wanted something different. Fortunately, I had an old taiko bachi, a drump stick using for playing Japanese traditional drums, something I used to do a lot. The bachi I used was made of Japanese magnolia, called hounoki. The hounoiki, has a grayish tone, so it stands out from the model just a bit.

So, now we have the second Honryou-sen model, completed and ready to send off. 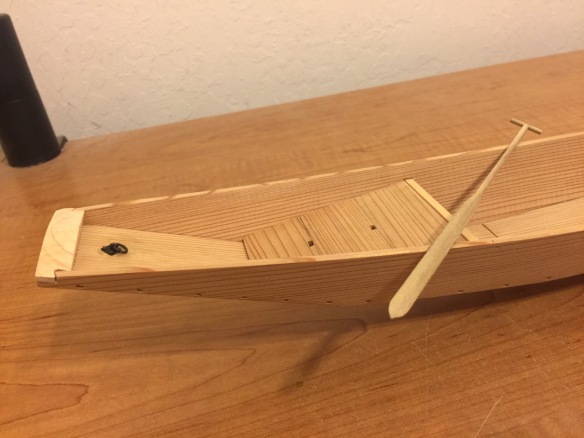 After I “finished” the model, I decided it might be nice to have a couple coils of rope tied to the ringbolts. I used .035″ beige line from Syren Ship Model Company. The line is very well defined, and it is pre-waxed. However, there is not enough wax for rope coils to hold their shape, so I ran the line through a cake of beeswax. This gives the line a little stickiness, allowing it to hold its shape better, but I still had to treat the free ends with a tiny amount of Alene’s Tacky Glue to help keep the coils intact.

The model now makes for another project completed this year, and I’m looking forward to wrapping up a couple other wasen projects that are close to completion, now that I’m a roll. Ω