The Souvenirs de Marine is a multi-volume collection of drawings that are the basis for many of the models in the French National Maritime Museum. The book was put together by Edmond Pâris and originally published in the 1880s. Among the collection of drawings of watercraft from around the world are several Japanese boats that were recorded by French Lieutenant Armand Paris, mostly in the areas of Osaka and Edo in the 1860s.

These drawings provide the only detailed records of some of the watercraft depicted. These include large coastal transports, fishing boats, pleasure boats, a large yacht owned by one of the many feudal lords, a row galley in the service of the Shogun, etc.

Now, I’ve built a model of the row galley, which is referred to in Japanese as a Kobaya, though there are some features that I feel that the drawing is missing, as the ship was out of service for some time and in disprepair, following the fall of the Shogun’s government many years earlier. So, that model remains technically unfinished.

However, there is an intriguing looking fishing boat that’s detailed in the available drawings. The boat is only described as a fishing boat, but it is quite large at 17 meters long, a little over 55 feet. But, what stands out the most is the unusual downward turn of the bow. This is the first time I’d seen this kind of feature. But, it turns out that it wouldn’t be the last time.

Over the years, I’ve been studying Japanese traditional watercraft, and I have since discovered that this is a type of bow called a Nomeri-type (のめり型). It effectively keeps the bow down in the water, reducing the influence of the wind on the bow, and allowing the boat to track a straighter course through the waves. This type appears to have developed on Tokyo Bay.

The boat is listed simply as a Fishing Boat from the Gulf of Yedo, Mississippi Bay. Today, this is called the part of Tokyo Bay near Yokohama where Commodore Perry’s ships were anchored in 1854. But, in Japanese this type of boat is called an Utasebune (oo-tah-say-boo-nay), a type of side-trawling fishing boat that appeared in the late Edo period and operated up into the Showa period, or from around the early to mid-1800s through the mid 1900s. There are also Utasebune in northern and southern Japan. They are also side-trawling fishing boats, but are all very different in appearance.

On Tokyo Bay, Utasebune were between about 11 and 17 meters long and operated by 3 or 4 fishermen. The photo below shows an Utasebune anchored, with nets hung up to dry. Only one large mast is shown, but I believe the other mast has been lowered, possibly to make the boat more stable at anchor. So far, this particular boat is the closest I’ve seen to the boat depicted in Souvenirs de Marine, as it clearly shows the distinctive, narrow, nomeri-type bow. 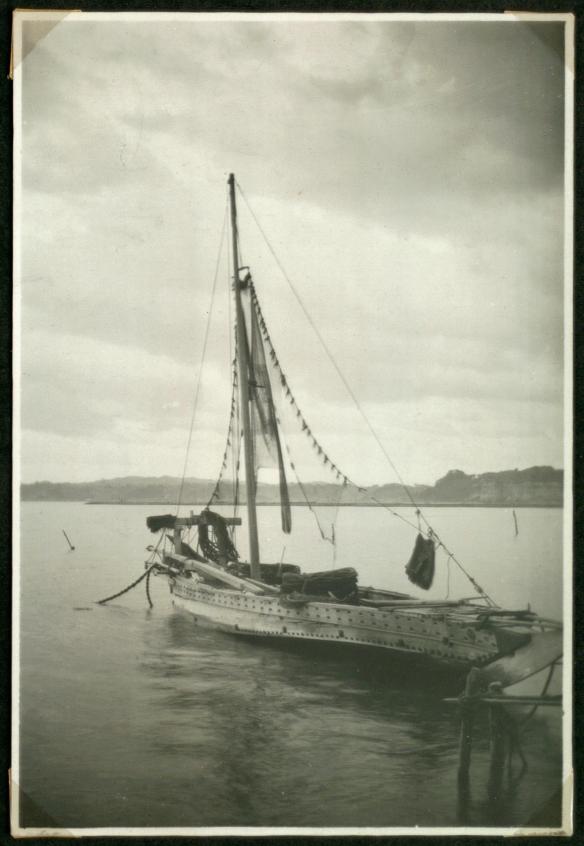 I decided that a model based on the Paris drawings would make a good subject, as the drawings are readily available to any modeler who wants to try to build it. Japanese traditional boats do not lend themselves well to western style naval architectural drawings, as much of the information in the drawings is not entirely useful. Such drawings lend themselves better to boats that are built up from frames or bulkheads and then planked over. However, the necessary information for the build appears to be present.

I really would like to build models in 1/10 or 1/20 scale, so I worked out the sizes and found that 1/10 scale is completely unreasonable unless I were building this for a museum, as the model would end up about 5.6 feet long. So, I figured a 1/20 scale model would be the next best size, as it would then be scale compatible with other models I’ve been building. But, even that would end up close to 3 feet long.

Perhaps in the future, I will build this in a larger scale, but for now, I decided to go with a smaller-sized model at 1/72 scale. This makes it the same scale as my recently completed Tonegawa Takasebune and my soon to be completed Kitamaebune model. The final model would then be only about 9″ long, which is pertty small, but that also means that construction should be relatively quick.

Before beginning, I scanned the drawings and brought them into Adobe Photoshop for cleanup and Adobe Illustrator, which works well for scaling the drawings, taking measurements, and for printing out the drawings in multiple tiles as needed.

By the way, I currently keep an old very of the software, CS5.1, and an older iMac running Mac OS 10.13 High Sierra just for this purpose. At some point, I may need to upgrade the Mac, the OS, and the software, but for the occasional wasen model drawings I do, which is all I use the software for, I don’t like the idea of paying monthly fees forever. At least not unless I come into some more money.

A couple weeks ago, my large format printer died. I’ve been using a Canon Pixma IX68020, which was working well up to then. It’s the least expensive printer I could find that could print on paper as large as 13″ x 19″. I think the print head quit, and doing a thorough cleaning didn’t help. It was just too handy to be without, so I found another one available for around $216, so I just went ahead and ordered it. However, this model at 1/72-scale, is small enough for the entire drawing to fit on legal sized paper, which any printer will print out. So, the printer problem didn’t get in the way as I have a simple and cheap laser printer for day-to-day printing.

In any case, it’s important to note that these Paris drawings are drawn to the outside of the hull. If some kind of internal structure is used for the model, the thickness of the hull planking will have to be taken into consideration.