Detailing of the Utasebune model continues. It still doesn’t show much change, but I’ve spent many hours on it. The primary addition are the mortise cover plates that line the hull.

As with other models in this scale, I’ve found that I could use my Silhouette Cameo 3 vinyl cutting machine to produce permanent adhesive backed vinyl to simulate the copper plates that would have covered the nail mortises on the real boat. These would darken and might actually turn a greenish hue. I think these were sometimes painted with coating of lacquer to protect the copper. On my model, I used a dark brown vinyl to simulate the “old copper penny” look.

The Cameo vinyl cutter uses bundled software to create the artwork that instructs it on what to cut. Being that I have nothing but rectangles to draw, creating the artwork is actually quite easy. It’s the applying of the vinyl to the model that gets tricky. Also, pieces this small require a good sharp cutting blade in the machine. I would have preferred slightly smaller plates along the koberi, or rub rail. But, this was about as small as I could safely get.

I may still do make something to cover the ends of the beams, but that gets a little fancy on the design side. I’d need exact sized open-ended boxes. But, thinking about it now, I think I’ll go ahead and given it a shot. It’s not like I haven’t done them before for the Kitamaebune model. 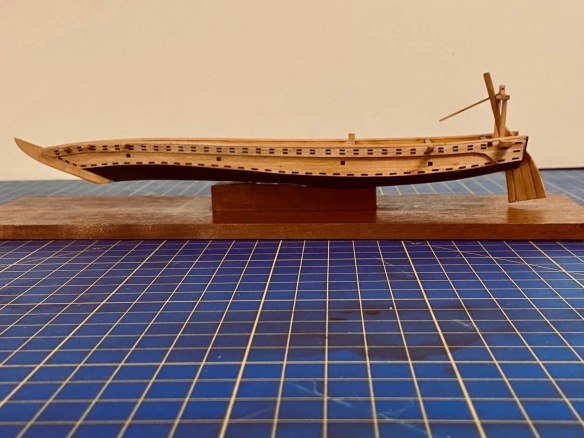 Even with the aid of a computer and the Cameo machine, it took me pretty much a full day of work to do the design work, testing, reworking, and application to get one side done, plus some of the other side. But, by the next day, the work was done.

As I said, I’m still contemplating the covering of the ends of the beams. Also, there are a few other small details I’m considering. But, the main vinyl work is done.

Now, this is a 1/72-scale model, and the vinyl works well for these details. For a larger scale model, say 1/32 or 1/20 scale, I tend to prefer to use actual copper like I did with my Tenma-zukuri chabune model. And, I’m still contemplating building a larger version of this fishing boat in the future.

But, for this model, the next issues I need to deal with are the rogui, which are the pivot pins for the mounting of the ro or sculling oars. From the Paris drawings this appears to have four rogui, with one mounted on each end of the two aft-most beams. These boats were usually operating by two or three fishermen, so I figure on making two or three sculling oars, though I don’t plan on mounting them. Still, I do need to consider where the hayao, might be mounted. These are the ropes that run between the head of the oar to an anchor point on the inner hull. Probably, these anchor points, or hayaoneko, are beneath removable deck boards. 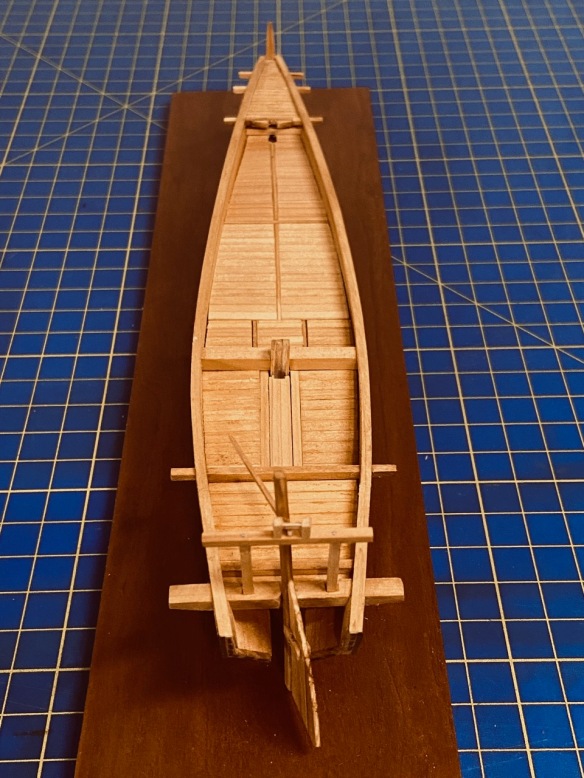 Because I made the aft-most deck boards run the whole width of the hull, I’m figuring they might have been too big to be removable and were just nailed into place. In this case then, I’ll need the hayaoneko located on the inside of the hull, just above the deck. I have no proof of this, so I’m just making this assumption.

And, while these aren’t shown on the drawings, I added pins to the fore most beam that aids in the tying off of mooring and other lines. These are often tapered with a kind of facetted ball at the tip. Again, I don’t recall the term for these.

What is a wasen without oars or some other means of manual propulsion? The Paris drawings show the ro, nicely. The are recorded as approximately 7 meters long, overall. That’s just about 23 feet. At this scale, that makes them about 97mm long.

For their construction, I decided to use some Japanese magnolia, called Hō in Japanese. Hou is hard and fine grained and somewhat grayish tan in color. It makes a nice contrast and it is my understanding that this is a common wood used in construction of the actual sculling oars.

My supply of hou wood has been pretty limited. As a former Japanese Taiko drummer, I happen to have a few old bachi, or drum sticks that I’ve sacrificed for my wasen models, and I’ve pretty well used the last bits for this model. Fortunately, for future projects, a ship modeling friend in Japan sent me several small boards – enough to keep me making sculling oars for years to come.

Now, I’m not planning to actually mount the sculling oars on the model, but if I did, they would look like you see in the photos below. As I mentioned above, these fishing boats are described as being operated by two or three fishermen. It made the most sense to include three oars, though if there were only two fishermen, they might leave any extra oars or equipment on shore to reduce the deck clutter. Of course, given that the deck boards are removable, they might have simply stored the oars below. But, I’m guessing they might reserve that space for fishing nets and floats, etc. 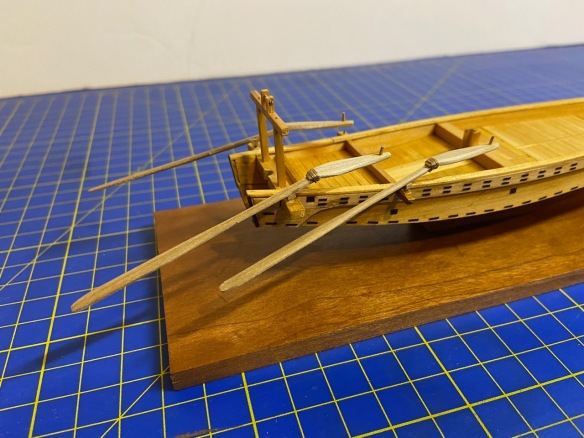 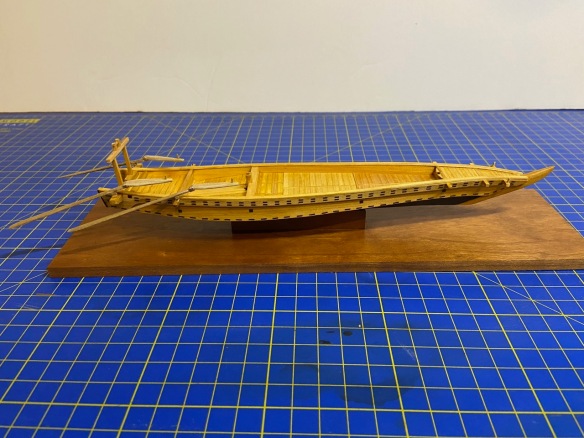 Most likely, I’ll simply stow the oars on deck, as much out of the way as I can. The only problem is that I have no information on how the fishermen operated, where on the deck they mostly worked, where the sail lines tied off, or where they dump their catch. So, I’m not really sure where exactly “out of the way” is, and I’ll just have to make my best guess.

The Last Details… for Now

Finally, to finish off the details of the basic model, I cut a couple small pieces of wood for the hayaoneko that I mentioned above. Also, I added the rig on the rudder, which was pretty basic and detailed in the Paris drawings. You can see these details in these last photos below. 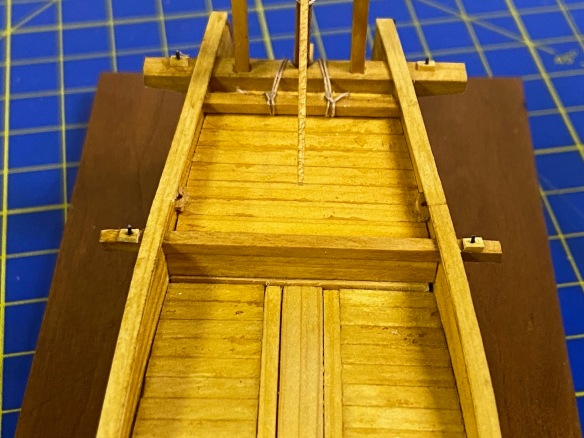 At this point, the only thing left to do is to add masts and sails, which are very basic on a Japanese fishing boat like this. I’m expecting to make the sails in the same fashion I made those for the Tonegawa Takasebune. The only real issues I still want to resolve are how the sail lines are secured on this particular boat, and whether or not wave boards would have been used on a boat of this size and time period. But, that’s going to take a little time to research.

In the meantime, this boat is essentially complete. I’ll make at least one more final post when I get the sails done and make a final call on the wave boards. Anyway, even if wave boards were possibly used, they were removable, and a model like this could easily be displayed without them.