Just finished the final post on the building of Woody Joe’s Shinmei-zukuri shrine kit. It’s been a fun project, and it gives me some familiarity with another style of Japanese architecture, and inspires me to learn more about it.

This is the final installment of the building of Woody Joe’s Shinmei-zukuri jinjya or Shinmei-zukuri shrine kit. The final four steps are mostly really simple and quick, though Step 10, which is the construction of the fence, involves more wood cutting than any other step of the kit. Still, I figured I should wrap up the build with one posting.

The appearance of the model, going into the final steps of construction..

Next will be the assembly of the torii, or the gate that, as Wikipedia describes it, marks the transition from the profane to the sacred. The instructions are very simple here. The Japanese text says to build the torii according to the full sized drawing shown, and the Japanese text in red in the box on the left simply identifies the full-sized drawing. 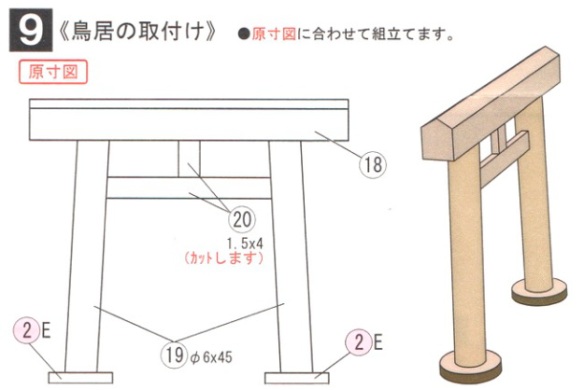 Building the torii requires the ends of the…