I moved ahead with the small nitaribune model, a 1/20-scale model of a cargo boat based on drawings by the late Mr. Seichi Fujiwara, who was one of Douglas Brooks’ teachers in Japan.

The boat is about the right length, but somewhat narrow for a traditional nitaribune. This one would be about 5′ wide in real life. But, according to the Funakagami, these boats were about a foot wider and possibly a little shorter, making the actual boats a little less sleek looking as this. I tend to attribute the sleek lines to represent more of a modern evolution of the traditional Japanese boat.

END_OF_DOCUMENT_TOKEN_TO_BE_REPLACED

Last weekend, I had a number of models on display at the Good Sam Showcase of Miniatures, which consisted mostly of my wasen models. This was the first time I’d had any of my Japanese watercraft models on display since January, and it seems to have spurred me to get back to work on some wasen model projects. While I have the two Woody Joe kits to finish up, those being the Kitamaebune and Atakebune kits, I also have two scratch models I stated long ago, the whaleboat-style Senzanmaru, and the small Nitaribune based on the late Fujiwara-san’s boat Kawasemi. 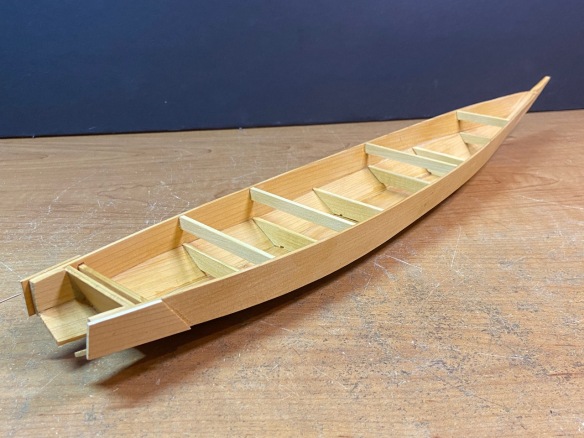 Small Nitaribune, or cargo boat, based on the boat built by the late Fujiwara-san for Wasen Tomo no Kai. 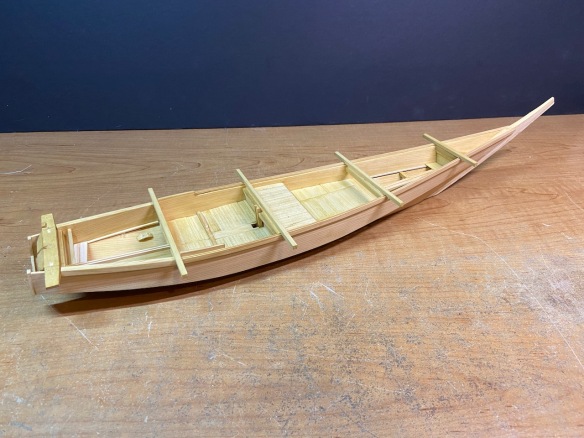 The Senzanmaru, a whaleboat-type boat use by the Awa clan.

END_OF_DOCUMENT_TOKEN_TO_BE_REPLACED

I finally managed to get some of my wasen models out on display, if only for a couple days. The models are included in a group of ship and boat models at the Good Sam Showcase of Miniatures this weekend.

This weekend is the annual Good Sam Showcase of Miniatures, an event organized primarily for doll house enthusiasts. But, as the overall theme is “miniatures”, the organizers were happy to include ship models and boat models. The event takes place at the DoubleTree Hotel in San Jose on Saturday and Sunday, October 8th and 9th. Those interested should visit their website at https://goodsamshowcase.org. This year, the South Bay Model Shipwrights club is participating, and I brought some models for display.

For this exhibit, I brought my Mary Taylor model, a 1/72 scale Japanese boats display, a 1/10 scale Japanese fishing boat, and a 1/24 scale Japanese pleasure boat. I also brought in the South Bay Model Shipwrights club’s Drakkar Viking Ship, which was a group build. I didn’t participate in its construction, but the model was on display at Ages of Sail, and I made arrangements to pick it…

Apologies to any followers who discovered they couldn’t get to my website here. Minor issues with the domain hosting that I didn’t notice, following a billing change that just happened to coincide with the renewal of the wasenmodeler.com domain name. Everything was taken care of last week, but I hadn’t noticed that all domain name services got reset in the process. In fact, I didn’t even know there was an issue until it was pointed out to me this morning.

But, all is well now. No major issues, and we’re good for at least another year!

I’m playing a little “catch up” on my blog regarding the Oguraike boat. As a reminder, this is a boat used for fishing and sightseeing in Kyōto, which was the former capital of Japan, prior to the Edo period. The boats were used until the pond was drained in the 1930s as part of a reclaimation project. My model is a 1/10-scale reproduction, based on the research of Mr. Tomohiko Ogawa, an artist and boatbuilder living in Kyōto.

Again, I don’t know the term for the bottom connecting plank, but with it now in place, I went ahead and added these mortises. On the actual boat, nails are driven into the side, to fasten the plank to the shiki, or bottom board. Nails are also driven up through the bottom edge, to fasten the plank to the hull plank. On the real boat, it would make more sense for this to be nailed first to the hull plank, then that whole plank assembly nailed to the bottom board.

END_OF_DOCUMENT_TOKEN_TO_BE_REPLACED

Yesterday, I finally got two more books from Japan that I found on Yahoo! Japan Auctions. I’ve found most of Japanese language wasen books I have either on the auctions or on Amazon Japan. The searching of these sites has become much simpler with the advent of a website/service called Buyee. This time, I didn’t use the Buyee service to make the actual purchases, I simply located the books through their website, which links into other Japanese retail sites, and asked a friend in Japan for a favor, and he got the books for me and shipped them to me.

END_OF_DOCUMENT_TOKEN_TO_BE_REPLACED 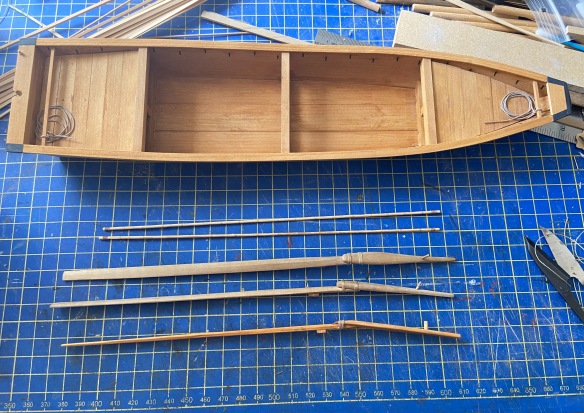 END_OF_DOCUMENT_TOKEN_TO_BE_REPLACED

I’d been making progress on the Ogura Pond Boat up through the month of March, but I hadn’t posted very much information about it here. Last I posted was back in January. At that time, I had glued up the three boards that make up the shiki, or bottom plate of the boat. Next is to shape the shiki, which is really quite easy the way I’m building these models. It simply requires printing out a portion of the drawings I’m using.

In this drawing, you’ll notice that I’ve marked out the mortises as well. This was something that was not on the original drawings, but I could see some of them in Ogawa-san’s photos. As I mentioned in my last post, what’s special here is that the mortises clearly aren’t perpendicular with the edges of the planks. This is something I’ve never seen this before, except where an occasional mortise has to angled to avoid a knot in the wood or similar reason. Here, however, they seem to be regularly placed so that the nails are driven at a slight angle towards the bow.

END_OF_DOCUMENT_TOKEN_TO_BE_REPLACED

I spent some time last weekend trying to figure out how to simulate the stone walls of the canal. I have, of course, the examples from the museum scene reconstructions. The two are quite different, and I really don’t know which may be more correct. Perhaps the only thing that might serve as an example, is the wall at the moat of the Imperial Palace in Tokyo. However, I’ve noticed from looking at photos that even this differs from the stone structure surrounding the gate at the palace grounds.

Meanwhile, I didn’t even have any experience in making a wall for a diorama, so I went on the Internet to look at different ways that people having simulated stone walls for dioramas, some very simple, some very complicated.

I considered making a wall from clay, since I was most familiar with using it, but clay is heavy. I also saw how some modelers use hydrocal to cast stone pieces. But, that requires making molds. Finally, I settled on simply carving plastic insulation foam, as I was using the stuff for my diorama anyway.

For this, I simply drew a pattern on the face of the foam, and I used the end of a small steel ruler to score the foam, which gave the wider-looking gaps between the stones. 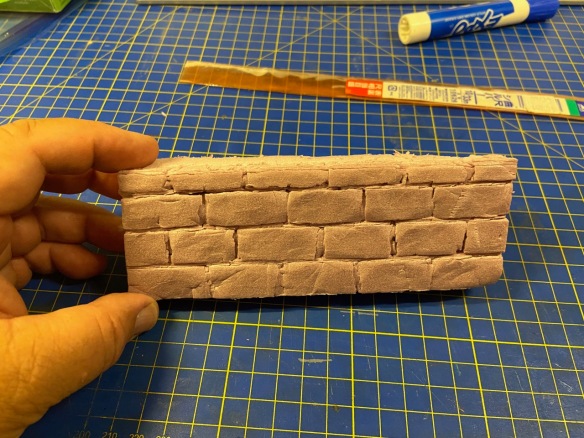 END_OF_DOCUMENT_TOKEN_TO_BE_REPLACED

Just about two years ago, I wrote a post about a special Internet screening of a new film called Aru Sendō no Hanashi (ある船頭の話), or A Boatman’s Story. Since then I have viewed the film and recently discovered that the film is now available for streaming as a purchase or rental from a couple services. If you don’t know anything about this film, you can read my last post on it here: Aru Sendō no Hanashi.

Note that the film title has been changed for western audiences to They Say Nothing Stays the Same. The english title may make more sense as to what the film is about. I went ahead and purchased it, as I had seen it before and I enjoyed the film, though it’s slow paced, confusing, and sad.