Meanwhile, I’m trying to work on making a realistic-looking dock, which is requiring me to look for good examples of Japanese-style docks in museum reconstructions. It is also requiring me to consider ways of giving wood an ages appearance.

The Oruga pond boat had been stalled for a long time, and I just posted an update on it, though even that’s a bit behind. The real trick now, is building the bow of the boat, which is unlike any other boat I’ve built so far. Most boats have a miyoshi or stem, to which the hull planks are nailed. Other’s have a bow plank instead, but it serves the same purpose, at least as far as the attaching of the hull planks.

The Ogura pond boat has neither stem, nor bow plank. The hull planks simply come to a point and are fastened together. If that were the only issue, it might not be that difficult to deal with. But, with this type of boat, the bow itself is a separate piece that has be constructed and fastened to the body of the boat. The trick is that the back end of this piece has to fit snugly inside the hull planks, not simply butted to the end of them, which would be simpler.

Also, if you look at the bow itself, the side planks have to meet and form nice flat surfaces for the joint. But the planks are not only meeting at an angle, but they also are not simply vertical, they lean out. Plus, the bow itself rises up, and is rounded to a sword-tip shape.

I probably made a mistake in adding the beams to the hull before constructing the bow, as it might have helped to have that internal frame to clamp parts to, and to help keep the bow properly centered. But, you live and learn.

My illustration of the Ogura pond boat, based on the drawings made and provided by Mr. Tomohiko Ogawa.

I managed to complete the basic structure of the bow, “using brute strength and awkwardness”, as my old high school pre-calculus teacher, Mr. Eatmon, always used to say, referring to some parts of problem solving. 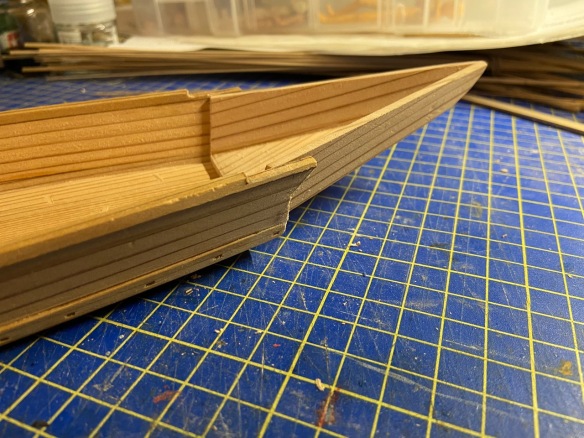 There are still a lot of details to deal with on the bow, but at least this much is done. Ω