With the Thanksgiving holiday last week, I’d been home a lot except for one day, Friday. Naturally, that’s the day the postal carrier showed up with the package from Japan. With nobody home to sign for it, I had to wait the extra day to pick up the kit. Fortunately, the Post Offices are still open on Saturdays, so in short order, I had the package.

The kit is not all that heavy, about 1-1/2 pounds, but it’s in a long box. I think this kicked the shipping cost up a bit, which was just about $30. Still, a ship model kit, particularly one this rare, for around $170 total, is not bad. That’s just about what I paid for the Woody Joe Hacchoro and the Yakatabune kits I bought from Zootoyz.

Having ordered through Amazon Japan, the only seller of the kit did not ship internationally, so I had it sent to someone that then re-shipped it for me from Japan and they didn’t charge me any service fees. He’s done this twice for me and I don’t want to impose on him any further. There are companies specifically set up to forward packages from Japan. I just finished setting up an account with one called Tenso.com. Next time, I’ll try them out.

By the way, it looks like I may have been wrong about this kit being out of production. I thought it was no longer manufactured because the company that makes it, Thermal Studios, primarily makes large model glider kits and doesn’t list the Tosa Wasen kit at all. However, I emailed them about it and if we understood each other correctly, they produce the kit. Perhaps it’s more of a local item since they are apparently close to Tosa, Japan, and seem to have some kind of connection with the Tosa Traditional Boat Society. 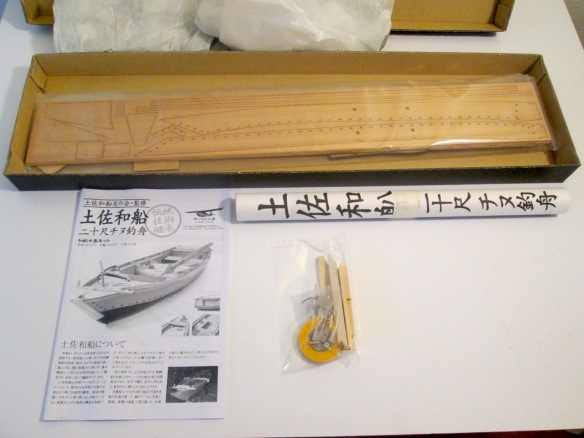 The kit itself is basically made up entirely of several laser cut sheets, plus a small bag with various kinds of parts, some other separate laser cut and milled wooden parts, instruction booklet, plan sheet, and even a sanding block. 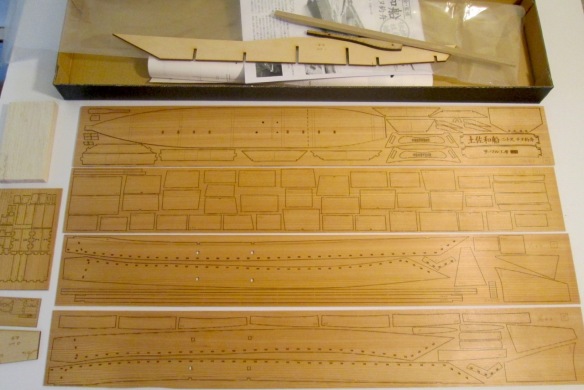 The laser cut sheets are made from Sugi (that’s “Sue” plus “Gee” with a hard “G”) or Japanese cedar, just like the real Tosa boats. Sugi is aromatic, though not as strong as the Hinoki used in so many Woody Joe kits. The parts are laser etched with Japanese characters to identify them. This probably makes locating parts a little more time consuming than if they were numbered. But, it’s just a matter of pattern matching. 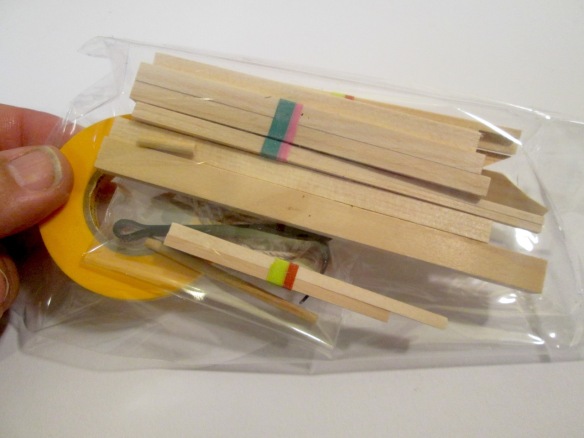 The bag of parts contains all the milled wood parts, all short pieces. Also in the parts bag is the metal anchor, the anchor rope, metal rings and fastener. The kit also includes a roll of yellow hobby masking tape, and for some reason, some plastic applicator tips used for applying CA glue. 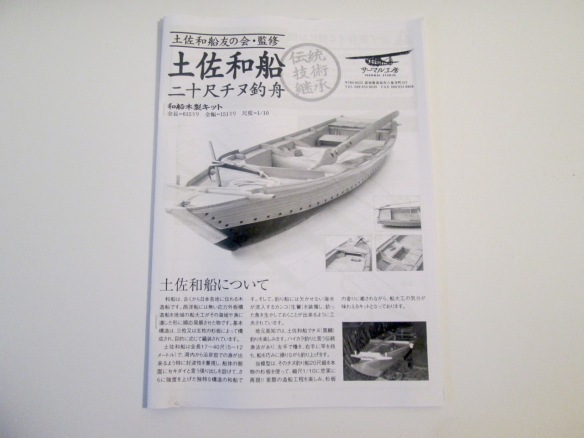 As expected, the instruction booklet is all in Japanese. The black and white printed book is 26 pages long and includes a parts diagram on the back cover, showing all the laser cut parts on their sheets. The diagram is pretty small and you really need a magnifying glass to read it. But, magnified, the part identifiers all appear to be readable. Instructions are divided up into 41 steps, with each step being clearly illustrated and each looking to be pretty simple steps. 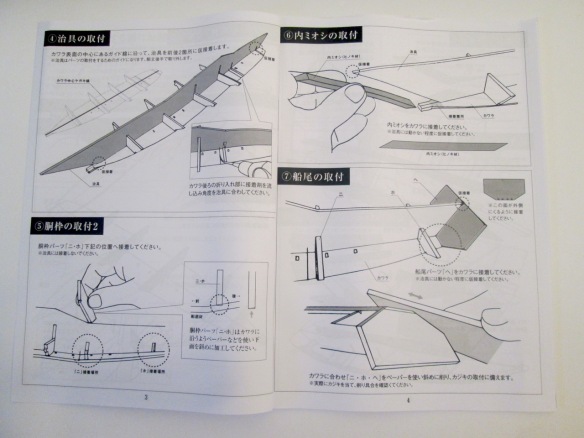 Time will tell if the Japanese text printed in the booklet is really necessary or if the model can be built solely by the drawings. But, in addition to the booklet, there is also on large plan sheet that gives a nice overview of the boat at full scale, which, by the way, is 1/10 scale. 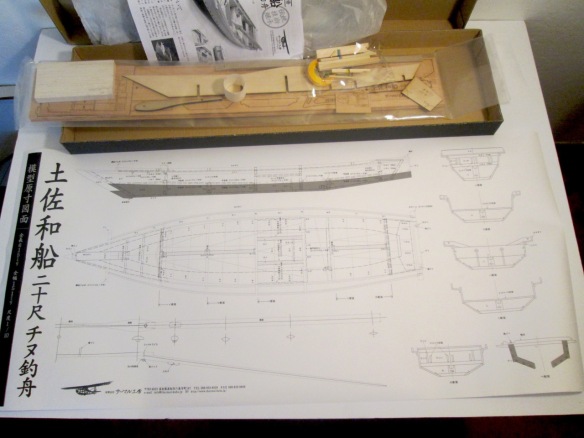 Overall, this looks like a really nice kit and it’s not that expensive. An additional bonus is that the  manufacturer, Thermal Studios, created a blog showing photos of the construction steps. This is really nice because it reinforces the written/printed instructions, giving you another view of the steps. Also, using Bing or Google translators, you can view the blog pages in English (or whatever your native language). This isn’t great as the translation can be pretty questionable, but it often helps.

Having attended Douglas Brooks‘ talk at the NRG conference this past October, and having been reading through his book on Japanese Wooden Boatbuilding, I can say that this kit looks very authentic and true to the way that the traditional Japanese shipwrights would have actually constructed their boats.

This kit would make an ideal study project for someone who is interested in following the work described in Mr. Brooks’ book. Personally, I’ve been planning on scratch building the Urayasu Bekabune that he discusses in his book. I think that building this kit first will help me a long ways towards understanding Japanese boatbuilding so that I can next attempt that scratch project.