Today, I was trying to find some information on the Funakagami, a book written during the Edo period used in the 19th century to help identify the river boats of the Kanto region for tax purposes. 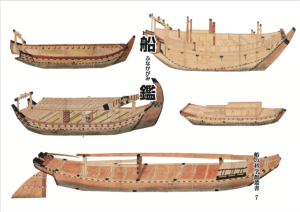 Specifically, I was trying to find out when the book was published, which turned out to be 1803. But, in the process, I ran across a journal entry of a then graduate student of the Marine Underwater Archaeology who was writing her thesis on Japanese boats through art. Very similar in subject matter to the recent series of articles by Jean-Pierre Mélis in the French magazine Neptunia that I’ve written about here a couple times.

The journal was written in 2007 to 2009 by Michelle Damian, and provides an interesting look into the process of thesis writing and the research that goes into it. What I found the most interesting was following the experiences of someone as she was going through roughly the same discoveries and issues as myself.

Link to the Journal of Michelle Damian

I also found it interesting that one of her advisors was Dr. Hans Van Tilburg, who I was in contact with a few years back on my research on the U.S.S. Saginaw, which was the subject of one of his books. It makes me wonder why I’m not doing something more academic, given all this kind of work I’ve been doing.

In any case, I’m very curious to find out if Ms. Damian has continued her work on the subject.