The Urayasu bekabune was my first foray into scratch building a model of a traditional Japanese boat or wasen. I chose the subject because of my contact with American boatbuilder Douglas Brooks, who has been studying Japanese boatbuilding methods from Japanese master boat builders for more than a 15 years. This particular boat was the subject of Brooks’s second apprenticeship. He had made some preliminary drawings and made available to me in exchange for some help I provided in getting him signed on as a guest speaker at the Nautical Research Guild conference in Mystic, Connecticut, in 2015. 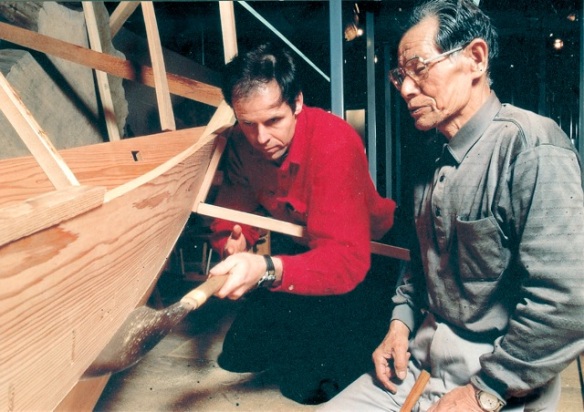 Bekabune appears to be a term used in multiple regions, generally referring to a small structured-hull boat built with thin planks. The origin and exact meaning of the term is unknown, though there are some ideas that the term refers to the sound of water hitting against the relatively thin planking of this boat.

Those interested in getting more information on this boat should check out the section on it on Douglas Brooks’s website. And, I highly recommend purchasing his book Traditional Japanese Boatbuilding, which provides a tremendous amount of background on the subject, and it details Brooks’s five apprenticeships with Japanese master boatbuilders, including his work on the Urayasu bekabune. The book is also written in a style that makes it a joy to read. 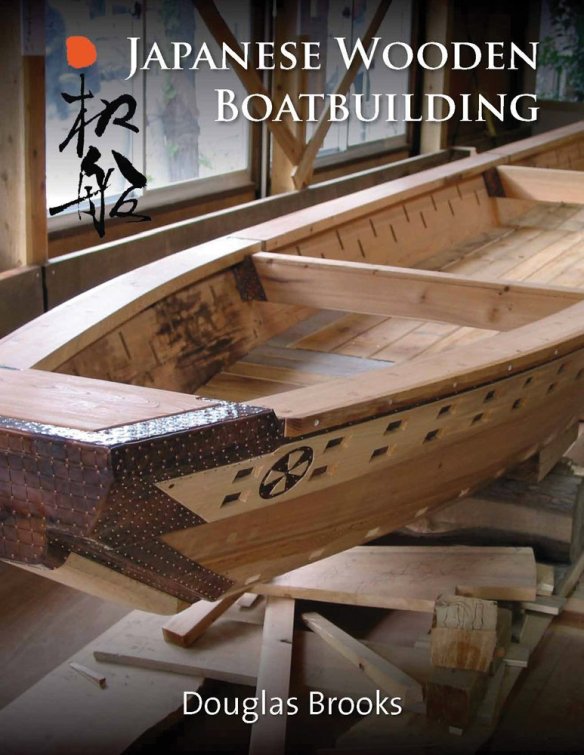 I have consulted with Douglas Brooks on this project from the very start. It was he who suggested building the model at a scale of 1:10, which is the same scale used by Japanese boatbuilders in their plank drawings, the simple drawings they make depicting the critical measurements of the full-sized boat. 1:10 is also a scale commonly used in Japan to model small boats.

Brooks also suggested I work in Japanese units of the kanejaku, where the primary unit is the shaku, which is very close to 1 foot, and units are decimal based. 1 shaku = 10 sun  = 100 bu, and measurements written as 1.25 would be 1 shaku, 2 sun, 5 bu. This is easy to then adjust at 1:10 scale as needed.

For the building material, I ended up working as close to the original material as possible by acquiring some thin sheets of sugi, or Japanese cedar, which is the main material used in Japanese boatbuilding. For the stem and the internal beams, I managed to get a large board of Port Orford cedar, which is nearly identical to hinoki, or Japanese cypress. Note that neither sugi or hinoki are available in the U.S.  This is where it helps to make contacts in Japan who can find some and send it to you.

The floor of the boat, called the shiki, was made up of three planks. I originally tried to simulate the mortises in the bottom of the boat. I practiced this on some other wood, but was having a hard time getting them right. Since they were on the underside of the boat and wouldn’t be seen (assuming that it wouldn’t be flipped over), I decided not to add the feature this time.

I ended up making two shiki, as the first one turned out to be too short. I’m not sure how I managed that. 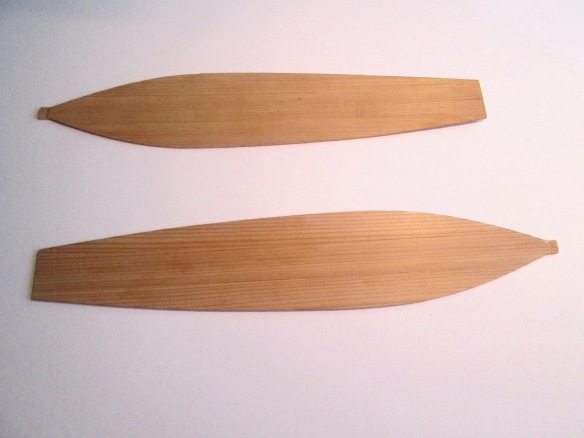 At the bow, the shiki is cut to fit the stem. 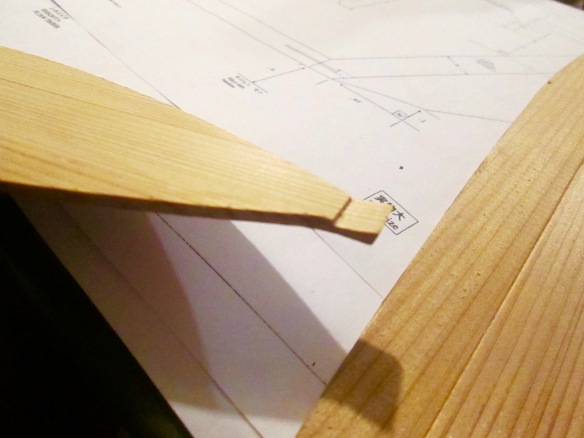 I did cut mortises into the transom piece, also called the todate (tow-dah-teh), but when visiting the museum in Urayasu, the boatbuilder there told me I should have 5 mortises, not 3. It’s clear that different boatbuilders have their own “correct way” of building the boat. I stuck with 3. 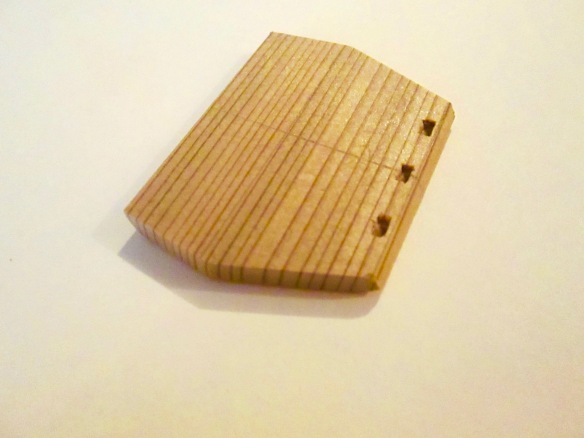 The stem, or miyoshi, was next. This was a more challenging shape. Its cross section is trapezoidal and it’s thicker at the base, tapering to a smaller cross section at it’s tip. This is one of the hinoki parts. 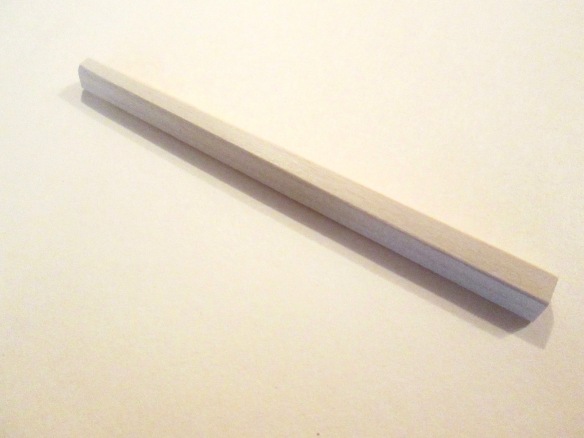 The shiki is bent slightly. In some areas, boatbuilders use fire to heat bend the wood. Apparently, the bekabune’s floor was just propped to the right curve and the added hull planks hold it to its shape. On my model, it was a lot easier to bend the assembled shiki using water, so that it would hold it’s shape on its own. For this, I used a fixture that just pressed the assembly down against blocks located at the bow and stern. It’s necessary to over-bend slightly, so the wood springs back to the correct amount of bend. 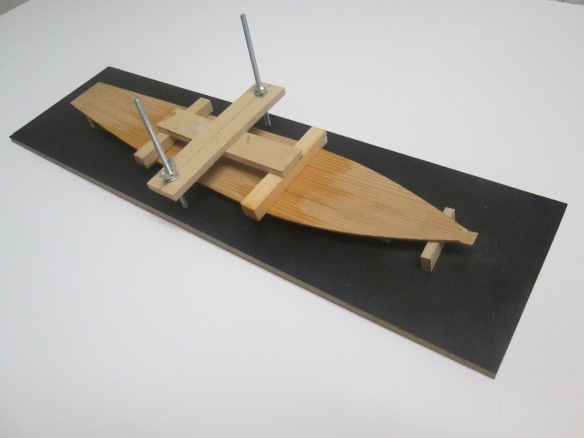 After struggling with really understanding all the fine details, and how to build a model of a boat that has no internal framing, I cheated a bit and built a model of a Japanese traditional boatbuilder’s workshop instead. 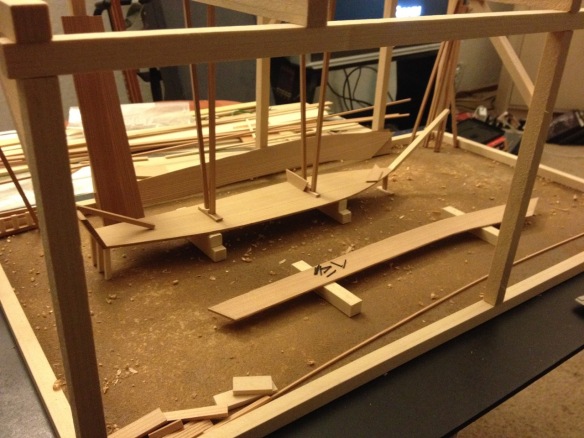 The diorama has ended up only a temporary display. I found it was too large and too fragile to transport, so I have since removed the bekabune model from it, and hope to redo the workshop for future displays. In the meantime, I pressed on with the build, always keeping in mind I could put it back into my boat building workshop diorama if necessary. However, the model sat for quite a while, as I pondered how to shape and add the hull planks with no framing to support it.

I eventually decided to move on to the Hozugawa Ayubune model, which had a much simpler design – one which I knew I could manage at this point.