I started working on planking the hull of the Himi Tenma shortly after my last post. The first thing to do was to cut a cardboard template to the approximate shape of the hull plank.

This was done by taping a piece of cardboard into place on the model. The bottom edge was traced with a pencil onto the cardboard. The shape at the bow was approximated, and the stern end was cut off a little bit long. The top edge was derived by marking the top edge at the ends of the model. I then used a thin wood batten to create a fair curve and traced that shape onto the cardboard template. The template really does not need to be very accurate. It just has to be big enough to work, and a bit oversized is best.

The template can now be used to help select the wood. I try to be efficient as possible and  find a way to get two planks out of the smallest sheet of wood that will work, since the wood I’m using is hard to come by.

Initially, I selected a 3mm thick piece, which is close in scale to the actual boat. I don’t know the exact thickness of the wood used for the Himi Tenmasen, but I’m guessing it’s a little over 1 sun thick, maybe 1.2 sun. That would actually be about 36mm or 3.6mm on the model.

Bending the hull planks for this model turned out to be particularly difficult. I used lots of boiling water and arranged clamps and props to get the planks bent. Often, the crazy array of props and planks were on the verge of exploding at any moment, making for a scary scene. It took several passes to get the planks close to the shape needed, but no matter how hard I tried, I couldn’t get the planks bent enough to fit at the bow. Using only glue to hold the hull together, there would just be too much strain on the glue joints to feel comfortable with it all, even if I did manage to force things into place.

After a few days of this, I decided my only course of action was to try using thinner planks. Dropping down to 2mm thick sugi, I cut a whole new pair of hull planks and went through the bending process all over again. This time, it really only took me a day to get the bending done, and the result was much better. The planks are a little on the thin side, but it should really only be noticeable at the stern where the edge of the planks are most visible. For the most part the uwakoberi, or cap rail, will hide the edge of the hull planking.

It was a happy occasion to see the hull glued up. Of course, it still took a lot of rubber bands and clamps to hold it all together while the glue dried. But now, I could permanently remove the temporary framework.

During the hull plank bending process, I had actually made the small wedge-shaped box structures that fit behind the todate. I don’t know the term for these – looking into that now. I wanted to add these as soon as possible, as they help support the todate, the transom, which previously was supported only by the glue joints with the hull bottom. 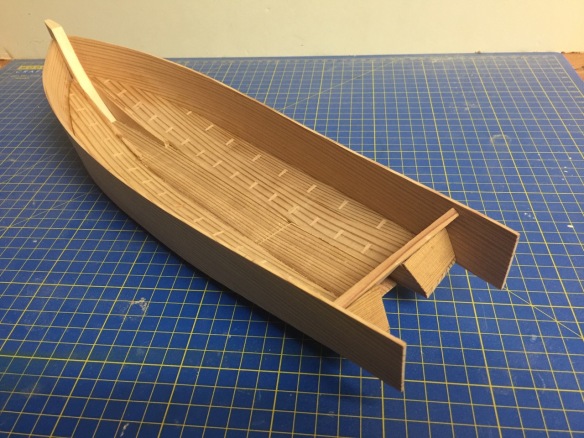 Pressing on, I went ahead and got some measurements for the beams. Douglas Brooks was able to provide the measures for a couple of them, but much had to be derived from photos. I have the museum drawings, but the beams on that boat are heavier than the one build last Fall. I cut the beams from hinoki, and started putting them into place.

One thing I noticed from photos is that some of the beams stuck out slightly under the koberi, or rub rails. The part that stuck out formed a little shelf on which the koberi sat on.

So, I cut the hull as needed and placed the beams, cutting them accordingly. 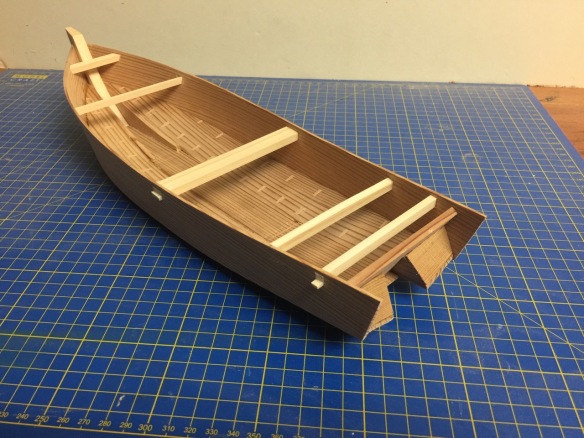 The beam ends that stick out need to be trimmed slightly. Then, I can add the koberi and uwakoberi. Still to go are the boards for the bow and stern decks, the toko, or main beam,  as well the frames and the attachment for the rope that holds the sculling oar.

Finally, I have to decide on simulating the fasteners. Many of the larger ones are covered by the koberi and a decorative board that fits on the hull planks at the stern, but there are those at the bow, plus many smaller ones to deal with.