I finally managed to finish enough cargo to call that stage of the model complete… Or, at least as complete as it’s going to get for this model. As you can see in the photos below, I’ve come up with a third kind of cargo. Probably not a very accurate type, as it appears to be some kind of finished product. 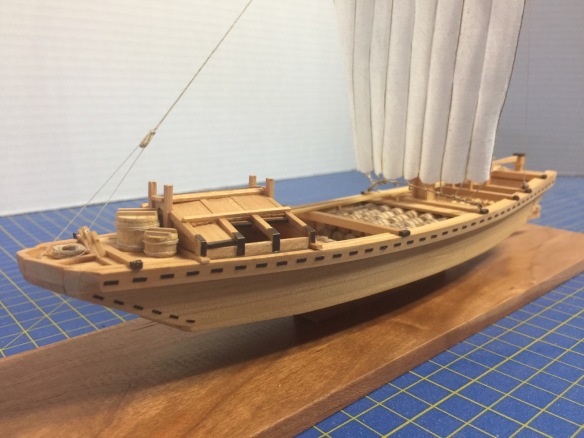 Perhaps the boat is carrying something downriver from one of the larger towns along the way where somebody produces a product that’s very flat. I think it might be somewhat unlikely that the boat should carry rice bales, some kind of vegetable in buckets, plus some kind of finished goods. But, I think it looks good, and keeps the viewers wondering what kind of goods those can be.

By the way, you’ll notice in the photo below, and the previous one above, that the main stay runs down to the deck and I had to make a small structure that’s effectively a pair of bits holding a simple winch. This was not on the drawings I was using, but appears on many of these boats. Without more knowledge of how the stay might be secured, this seemed to be reasonable.

The stay leads down to a simple wooden block, which I basically copied from those on the Woody Joe Kitamaebune model. The block I made is a very simple teardrop shape with no sheave. I don’t know this for sure, but I believe early blocks in Japan did not have a sheave. This was suggested to me by someone I spoke with in Japan when I visited the Hacchoro in Yaizu harbor.

At the top end of the stay is a small loop that goes around the mast from the back side. The stay itself goes back over the loop and down the front side. In this way, the stay holds itself in place. 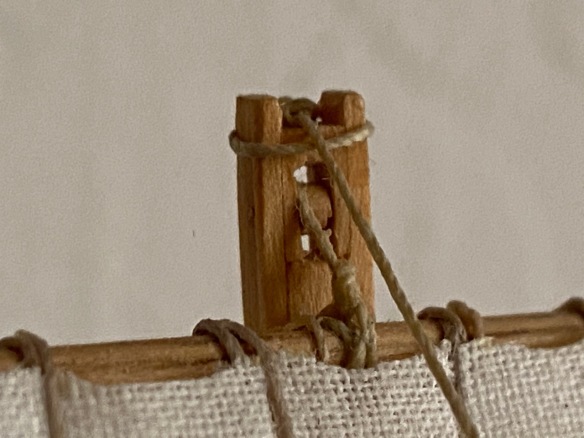 Larger Japanese boats basically had two loops around the mast with wooden battens attached that prevented chafing of the ropes. At 1/72 scale, this feature is pretty small, but still noticeable. I simply cut some tiny wooden strips to use for the battens and glued them a couple thin ropes across their backs. Some double-sided tape helped hold them into place on the work surface while the ropes were tape down across the battens as the glue dried.

The final assembly was tied to the yard, and hung somewhat loosely around the mast. This feature appears on the larger coast transports as well, but I haven’t seen anything like this on small boats. I don’t know how large a boat would have to have been before it required something like this. 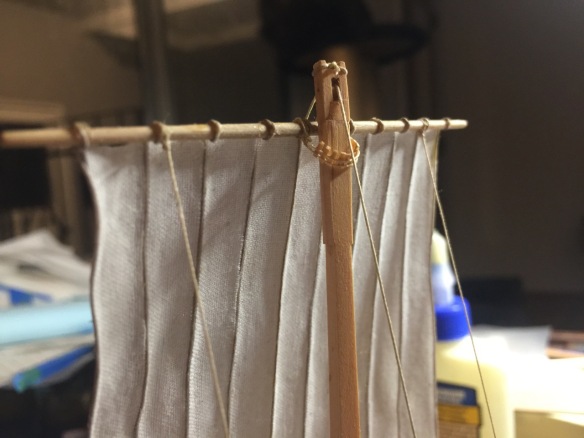 The last step in the construction of the Tonegawa Takasebune was to add some working “stuff” into place. I figured there needs to be a plank, which can be used for loading and unloading, as well as for walking over the top of the cargo, as well as a pole or too for pushing the boat along where necessary, and a sculling oar for the same. 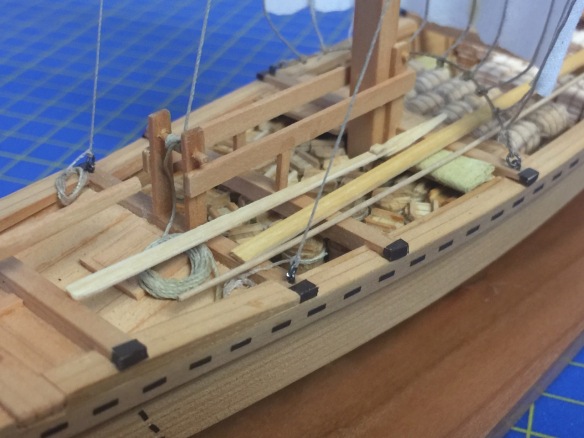 I also folded a piece of painted tissue paper to represent a matt or tarp that could be used to cover some of the cargo in bad weather. I say tarp here, but I suppose that really depends on when this boat is represented, as it was used up into the early 20th century, and probably back into at least the 18th century, but I really don’t know how far back it goes. Something to look into.

In any case, in early days, the tarp would have actually been more like a thin straw mat. Realistically, these boat probably would have been piled high with as much cargo as they could handle, and the straw mat would probably allow the boatmen to better secure the cargo, as they could tie the mat down over the cargo to help keep any from shifting loose off the pile of cargo.

Some woodblock prints depict canal boats loaded high and covered with a tarp or mat with planking riding on top so the boatmen could climb more easily over the mountain of cargo.

The final model was mounted with double-stick tape onto a very simple cherry wood display base I cut for it that I gave a simple satin lacquer finish. The model raised up on a cherry wood block, allowing the rudder to properly hang down.

The 60尺 (60-shaku or about 60 foot) Tonegawa Takasebune model is only 10″ long at this scale. So, it’s a pretty small model, but perfect for scale comparison with Woody Joe’s Kitamaebune and Higaki Kaisen models, which are both also in 1/72 scale.

In the photo above, you can see the model sitting up on the shelf with the still incomplete Kitamaebune model on the left, for size comparison. The model on the right is a Woody Joe kit of the Horyu-ji 5-story pagoda, but that’s in a completely different scale of 1:150.

But the Tonegawa Takasebune is now complete. I will be including it at an upcoming display of my Japanese boat models at a Japan Day event next month at the Asian Art Museum in San Francisco. The date for that is October 17th, 2021, but I’ll post more info shortly. Ω