Sunday, October 17th, was my first display at the San Francisco Asian Art Museum and it went pretty well. It was a bit stressful getting everything together in time, but once I had all the models displayed and was talking to people about them, it was pretty relaxing. The event was just a one day showing, and there were many other things taking place as part of the event.

I had 10 of my completed models on display, and I decided to bring several models that I had in early stages of construction, so I could show how I build them. Information cards provided visitors with the basic information about the model and what it represented. There was a lot of information I had to leave out in order to fit the text onto those large index cards.

Behind the models, I displayed what artwork I could find that showed the specific boat types in Japanese prints and paintings.

Four of the models were built from kits, including Woody Joe’s Hacchoro, Yakatabune, and Kitamaebune, as well as Thermal Studio’s Tosa Wasen. That’s probably the weakness of this specific display, as I think most people would like to see models that I built from scratch, and most of those that I have are smaller boats, whose detailed construction I’ve been studying. 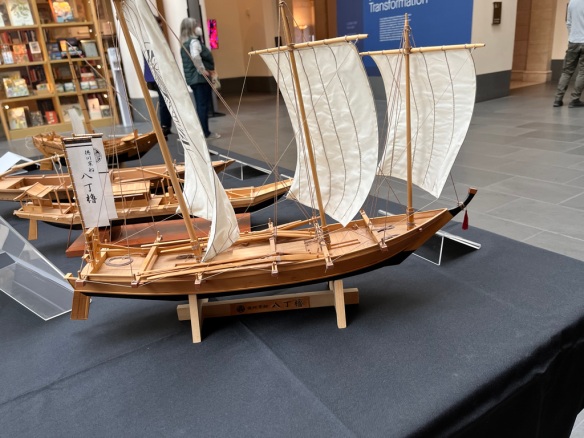 The bigger models attract the most attention, and they are kit builds. For my Japantown bank window displays, I mostly use the kits. For displays at the Asian Art Museum, it would have been nice to focus on the scratch builds. It’s something I’ll work on in the future. It means not only scratch building more models, but models of larger boat types, and ideally, models with sails, as they attract the most attention. 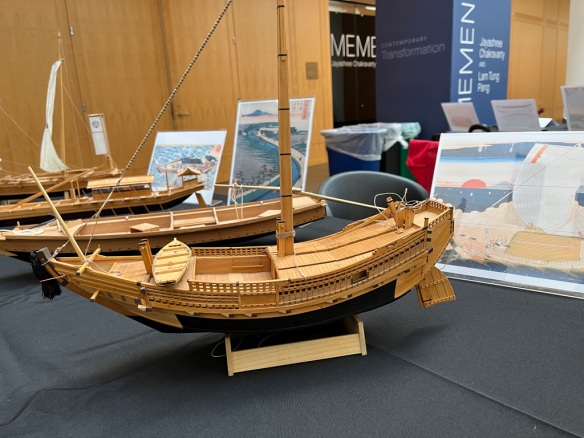 I had several in-progress projects on hand to illustrate how the models are built. This drew some interest too, though I didn’t have much time to actually demo the construction of the models in the morning, as that’s when I had the most people coming, asking questions about the models.

The best part is probably that it got the interest of many kids. There was one in particular, who was half Japanese with a Japanese mother and an American born father. He was maybe 8 and spent a lot of time hanging out with his dad and he was the most interested. So, I showed him everything I could that he seemed the most interested in. He had lots of questions and his dad was very encouraging. His mother came by too. She was originally from Ibaraki prefecture, around Lake Kasumigaura, which is well known for a type of side-trawling fishing boat called a Hobikisen. 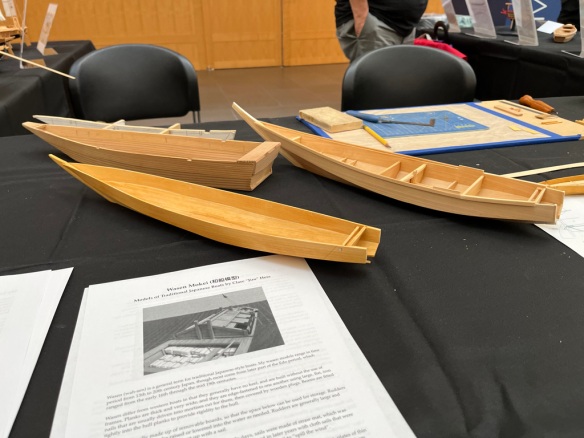 The display was pretty well received, but it would be a lot easier to set it up somewhere, and leave it for a period time, like when I have my Japantown displays in the Union Bank window. They still won’t allow that due to Covid restrictions. Makes absolutely no sense to me, and I think the bank management is just being lazy about it. Japantown needs more things of interest and putting these in their community room window isn’t likely to increase the spread Covid.

I talked to a few visitors who had some ideas about displaying them again in Japantown, so well see what I can do again. In the meantime, I have some other display possibilities I will look into for maybe early 2022. Ω