I spent some time last weekend trying to figure out how to simulate the stone walls of the canal. I have, of course, the examples from the museum scene reconstructions. The two are quite different, and I really don’t know which may be more correct. Perhaps the only thing that might serve as an example, is the wall at the moat of the Imperial Palace in Tokyo. However, I’ve noticed from looking at photos that even this differs from the stone structure surrounding the gate at the palace grounds.

Meanwhile, I didn’t even have any experience in making a wall for a diorama, so I went on the Internet to look at different ways that people having simulated stone walls for dioramas, some very simple, some very complicated.

I considered making a wall from clay, since I was most familiar with using it, but clay is heavy. I also saw how some modelers use hydrocal to cast stone pieces. But, that requires making molds. Finally, I settled on simply carving plastic insulation foam, as I was using the stuff for my diorama anyway.

For this, I simply drew a pattern on the face of the foam, and I used the end of a small steel ruler to score the foam, which gave the wider-looking gaps between the stones. 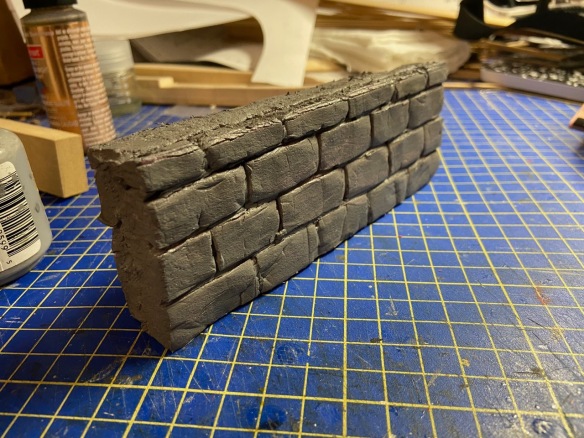 Considering that not all stones come from the exact same part of a quarry, I figured I need some variation in coloring. 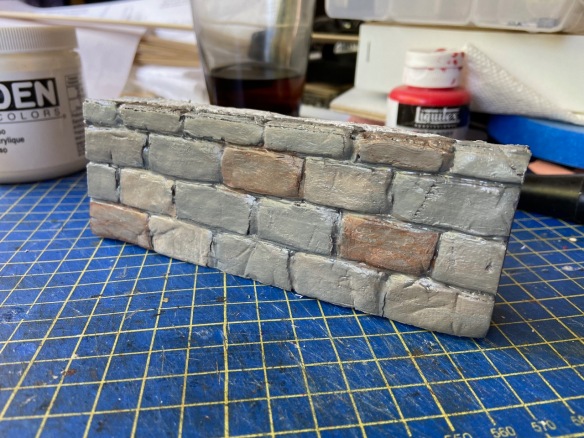 This first attempt doesn’t look bad. But, to me it looks more like a gray brick wall than a wall of cut stone. Looking at it, it just didn’t seem to scream out old Edo period canal wall. It seemed to remind me more of a European castle dungeon wall or something. So, I looked back at options again, and looked other stone walls in Japan.

Finally, I had this idea in my head for making something that might look more correct. So, cut a test piece of wall section, and it seemed to look okay. I decided to take a chance and cut the real wall piece I’m using for the diorama.

The new wall looks similar, but I kept the space between the cut stones to nothing more than a slice of the knife. Also, I didn’t round the edges or corners of the stones any, and I changed up the pattern of stones, so it’s not the classic staggered “brick pattern”. I painted the wall, gave the seams a wash of black to make them stand out a little. I also dry brushed a little lighter coloring overall, and added some color variation to a few well-chosen stones. I could probably do more, but I’d probably just make things worse, and I’m pretty happy with the way it now looks. Best to leave well enough alone and move on. 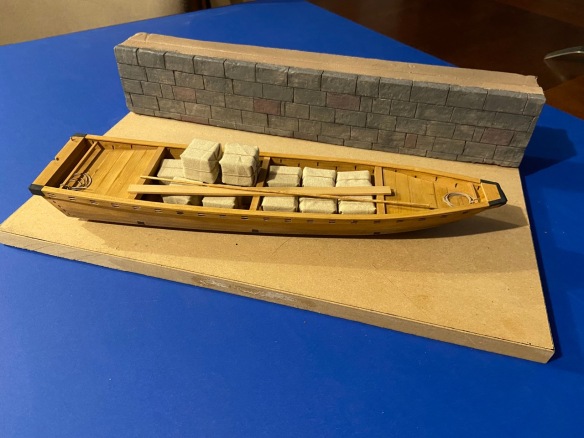 And here’s a closer look at the “stone” canal wall… 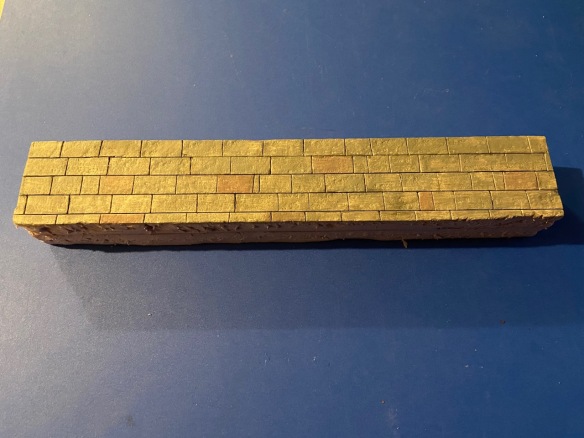 With the wall complete, I now have to plan out the details of the small dock, and other stuff that will go into the water.

By the way, at this point, I’m thinking that I will probably end up using resin for the water. I have some “Realistic Water” from Woodland Scenics. But, I’ve used it before on a diorama and, over time, the stuff shrank badly. It still looks “okay”, but on the diorama I did of the Nihonbashi bridge, I used resin, and it still looks as good as the first day I poured it.

I’m expecting that I’ll have to make the wasen model a permanent fixture in the canal. I could try to make it removable, but it’s probably best if I just build another boat, if I want to display just the boat.

I’m planning on making this an active looking scene, with a sendō, or boatman, maneuvering the boat up to the dock. But, my figure making skills are very limited, and the scene may look better without the figure. I’ll have to make a final decision about this when I get further along. There are still plenty of elements to build before I no longer have an option, including the sendō himself.

I really like the way some scenes look without any people in them. It’s then just about a moment in time when you can focus on the boat and it’s surroundings. Kind of a 3D still life painting. Also, when you add a figure, if it’s not a very good one, I believe it can detract from the scene, and become an unintentional point of focus, mentally removing the viewer from the moment.

But, a well done figure can add life and motion to the scene. So, it really comes down to how well I can create a figure. We’ll see about that.