As I’m preparing for my study trip to Japan in, I’ve been checking on museum websites and such. The Maritime Science Museum is closed, except for a small museum annex, their website still lists the museum publications.

I don’t see any place to actually purchase these, but there are a couple books that you can download as a pdf. The one that immediately caught my interest had a number of Edo period boats on the cover. So, I immediately downloaded it and started looking through it. 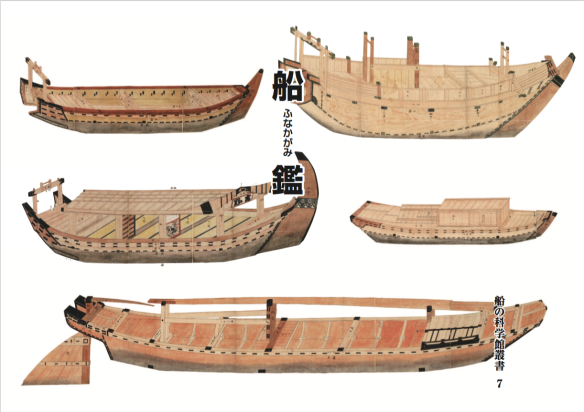 I’m still working to understand the text, but the first part of the book is mostly old illustrations. Apparently, this is taken from a book called a Funekan, which was used by the Bakufu, or Shogunate government, to aid in identifying the many types of small boats on the rivers of the Kanto district, which is the region of old Edo (Tokyo) and its surroundings. The identification was necessary for taxation purposes.

Such a book is a boon to anyone who is trying to learn about different types of Japanese boats. There is little information about the boats themselves, but there is a nice large illustration of each boat type, and an index which classifies the boat. In the back of the book is a section which identifies the names of the parts of each boat. In the end, the text gets very meaty with, as far as I can tell, discussion about taxes, etc.

The book can not be printed as it is a password protected pdf. But, I discovered I can still copy text and take screen shots of the images to compile into my own notes. The copied text can be pasted into Google Translate or similar service. I’ve found that the translation is sometimes not as useful as the pronunciation/romaji spelling that is shown – For those who are familiar with Google Translator, just look under the box on the left, which is where you paste in the original text.

For me, the book has confirmed things I’ve already learned, taught me a number of new things, allowed me to see things I’d only read about, and raised a number of questions that I will be researching answers to. Ω

8 thoughts on “Funakagami – A PDF Book on Japanese Boat Types”