Recently, there were several posts on Facebook regarding boats from the southwestern end of the island of Kyūshū. It took me some effort to review the posts and linked pages to figure out that the boats described were of the same general type, as the terms used to describe the type seemed to vary a bit. The boat is a Satsuma-gata, or Satsuma-type boat.

Satsuma is an old feudal domain that makes up part of what is now Kagoshima prefecture on the island of Kyūshū. I didn’t know much about this area or about this boat until the recent Facebook posts.

One of the posts provided a link to a compilation of information on the Satsuma type Japanese boat: http://www.nantenbo.com/satsuma-hansen/

Another post I found linked to a past exhibition about a Japanese boatbuilder who built the Satsuma type boat. He became too old to continue building the boats, so he built very detailed models of them instead. These not a great deal of info, and the exhibit is long gone, but it seems that the venue for the exhibit was a seaside resort that has some models on display: http://gazoo.com/my/sites/0001452702/kasasa001/Lists/Posts/Post.aspx?ID=175

My Own Satsumagata Wasen Connection

It wasn’t until after I was translating these posts that I realized that I actually have some of my own information I collected on the type during my grand wasen research trip almost exactly 1 year ago. The information collected is in the form of photos of a replica Satsumagata wasen that was at the Toba Sea Folk Museum (Toba Umi no Hakubutsukan or 鳥羽海の博物館). At the time I took the photos, I didn’t know anything about the boat type.

The sign posted in front of the replica boat described it as a 5-person fishing boat from the west coast of Satsuma and used for catching mackerel or marlin in the rough waters of the East China Sea. The replica boat is 8.12 meters long and 2.42 meters wide. The special characteristic described of this type is a feature called a nami-gaeshi, which is a kind of rail at the upper edge of the hull planking that effectively widens the hull, which helps the boat handle rough water. 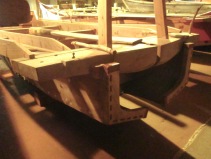 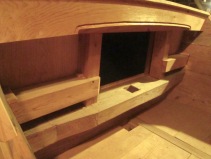 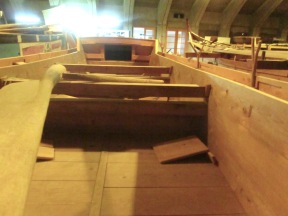 Looking back, I’m surprised to discover that I took so many photos of this boat. It wasn’t out of a particular in the boat, but in the condition and completeness of it.