Last week, I displayed my collection of Japanese traditional boat models at the big Wooden Boat Festival in Port Townsend, Washington, and I managed to sell my Higaki kaisen and Gifu tabune models to visitors to the show.

But, that leaves my collection of wasen models without a flagship sengokubune. And, with a Japanese boat models display in Japantown coming up next month, it’s become that much more important for me to finish the Kitamaebune kit. So, now that I’m back home, I’ve been putting greater effort on this model.

Next, I turned my attention fully to the mounting of the rudder. Now, the kit has a slightly simplified rigging of the rudder as compared to the Higaki kaisen kit. As you can see from the clip of the instructions below, the rudder lifting ropes are just tied to a couple eye pins in the cross beam over the rudder and the ends are simply glued to the rudder in a way that makes it look like they’re just looped through a sheave hole.

I decided to up things a notch, but the effort didn’t change the appearance any. I ran a rope from each of the eye pins, down through the sheave holes in the rudder, back up through the eyepins and tied them off inside the hull.

Photo I took in 2016, showing the massive rudder of the Hakusanmaru on Sado island. 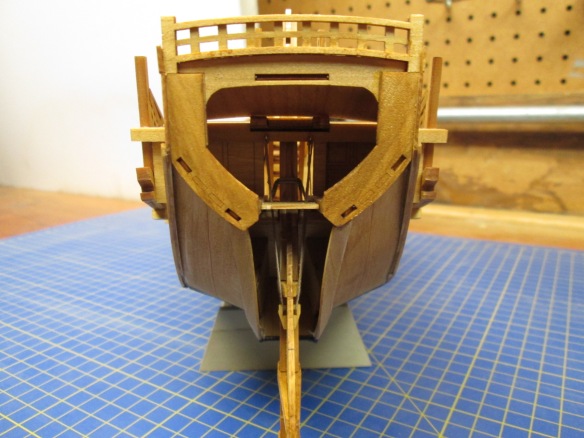 While it’s a little closer to the actual ship, it wasn’t really enough to make a visual difference in the model. What would have been more authentic would have been to lash a couple blocks into place instead of using the eye pins. But, even that would be hard for anyone to notice if they weren’t extremely familiar with this ship type.

What I did do was to use some heavier rope and loop it around the rudder, which was done to hold the rudder tight against the heavy support beam. It wasn’t hard to do and adds another little piece of detail, though again it’s a barely visible one.

The rudder assembly ended up looking pretty nice, even though the extra detail isn’t noticeable.

A view into the stern of the Hakusanmaru in 2016. Note the blocks for the rudder lifting rig and the heavy ropes around the base of the rudder post. 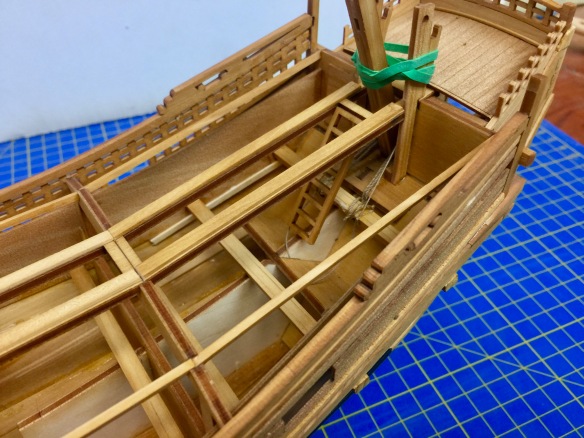 Ropes tied off to a beam inside the hull.

Planking the deck of Woody Joe’s Kitamaebune kit turns out to be one area where the manufacturer saves the builder a lot of time, compared with their Higaki Kaisen kit. In the Higaki Kaisen kit, you have to cut and lay down each individual plank, along with all the beams and stringers that support them. With the Kitamaebune kit, Wood Joe has laser-etched the plank seams onto individual panels that just have to be glued into place, saving the builder a lot of hours, and making for a cleaner looking model.

Adding the laser-etched deck panels was mostly straight forward, as long as you plan ahead and do lots of test fitting. I found it worked the best to lay down the deck panels starting at the forward end of the big cabin and work aft from there. Also, I found that the seams between a couple panels didn’t line up all that precisely, so it was necessary to do a little sanding to close up the gaps, though they were pretty small gaps to begin with.

In the end, it all was starting to look really good. The pre-etched deck planks are just a little too perfect looking, and the beams that are represented between the planks have the grain running the wrong way, but it does make for an easier, quicker build. 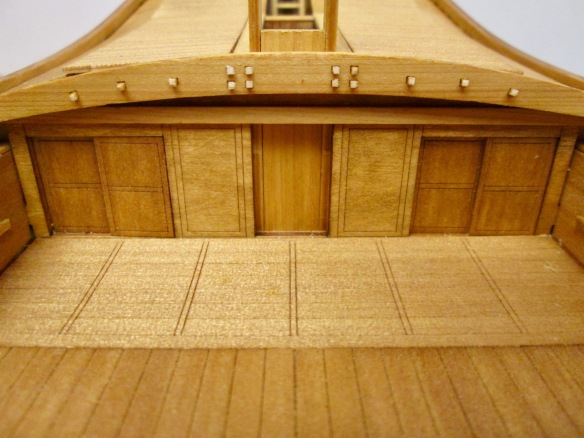 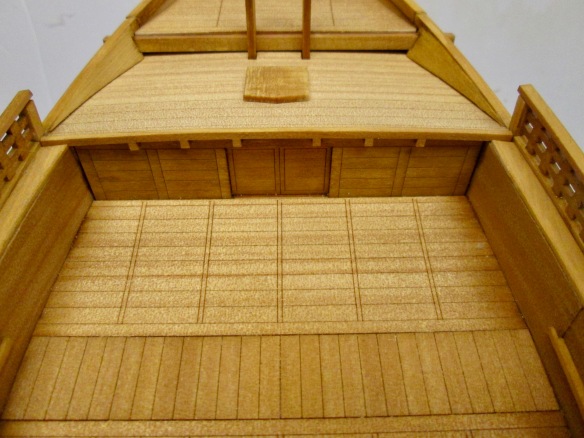 The last pieces of the deck planking are two small pieces with holes in them, through which halyards run through. I’m just a little concerned with these pieces, as they are thin wood, just like the deck, which will take the full strain of any tension on these ropes. So, once these halyard are rigged, it’s going to be extremely important to not snag or over tighten them, as I think the little piece of wood will either pop loose, if the glue joints fail, or the wood between those holes will break open.

I mostly dealt with this by using a good amount of tightbond, which also glues the ropes into place too. You might consider reinforcing this by inserting a cross-piece underneath, for the rope to wrap around. The cross piece would then take the strain and spread it to the adjoining deck plates, rather than all the strain being taken by these little hole-y parts.

Too late to reinforce my model. Wish I’d thought of it sooner. I’ll just have to be extra careful.