In 2019, boat builder Douglas Brooks had developed a project together with Nina Noah of an organization called The Apprenticeshop, to go to Japan and build two traditional Japanese boats with two different Japanese boat builders. 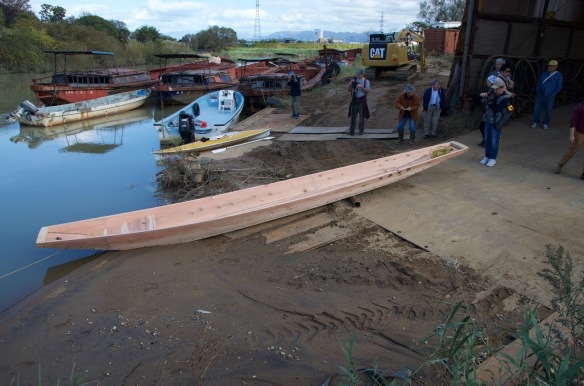 The Honryousen, or simply Honryou, is a riverboat built in a style called itaawase, which simply means “plank joined”. That the term refers to a boat built entirely of planks, including the bow and stern – basically one with no cutwater. While not exclusive to Niigata prefecture, this was very common on the rivers there.

The Honryousen that Douglas Brooks built was dubbed “DNB Maru”, named for Douglas, and the two people from the Apprenticeshop that came with him to Japan, Nina Noah and Ben Meader.

If you would like to read about the two projects and view a couple videos, I recommend visiting the Apprenticeshop blog here: https://www.apprenticeshop.org.

I have been asked to build a 1/10-scale model of the boat for fundraising purposes. On the surface, this seems like a very simple project. After all, not including the planks that make up the seating platform at the stern, I count a total of 8 pieces. The trick on this subject is that the measurements I’m getting are traditional Japanese boatbuilding measurements. This means I get certain key measurements, but I don’t get any angles (though I did get one for the angle of the hull planking to the bottom board). So, many of the details I’m going to have to derive mechanically.

An example is that there is a joint in the bottom board where the floor makes a sharp rise. I’m not given the amount of the rise, as it is not a recorded measurement. Instead, I’m told that a measuring stick laid across the joint with be a certain distance above the joint. I have to derive the angle itself, or at least recreate that layout so that I can create an accurate pattern. I could also try to do it mathematically, but then I’d have to recall my trigonometry – who says you’ll never use that stuff?

Now, in this example, the bottom actually has a slight bend in it, but if you ignore that bend, which is actually quite small, and if that measured point is in the mid-point of that measuring stick, you can pretty well say that the rise at the end of that stick is twice that in the middle – now, that’s a carryover I recall from trigonometry. In any case, there is some wrestling of numbers required, and this is just an example.

A more fundamental example is that while I do get many measurements, I don’t have any model plans to work with, so I have to make my own drawings and templates to use for cutting the parts I will need. This is pretty much par for the course when dealing with traditional Japanese boats, as they were not built from full plans, so few plans exist.

Usually, the closest thing to a plan in traditional Japanese boatbuilding is the plank drawing, which defines certain critical measurements, usually in 1/10 scale. However, in this case, there are a couple not-to-scale drawings I managed to get. These are used to identify the locations of the various measurements.

Using the measures provided with these drawings, I used an illustrator program to draw out the basic details at 1/10 scale. The measurements in the drawings above are in shaku. Since the software I’m using doesn’t include shaku as a measurement unit, I converted everything to centimeters.

There are several websites that will do this for you. I mostly ended up using this one: https://www.convertunits.com/from/shaku/to/centimeter. But, I found most of them to pretty much do the same thing.

One thing I’d forgotten is a unit called a ken, which is equivalent to 6 shaku, and appears in only two places on the drawings.

The pieces at the top will be used as cutting patterns, except for that thin piece on the right, which is an angle guide. The side profile on the bottom will be used to create a backbone for the hull former, which I will cut from 1/4″ MDF (Medium Density Fiber) particle board. The hull parts on this model will all be cut from some newly acquired 3mm sugi, or Japanese cedar.

Getting everything right, along with several emails back and forth with Douglas Brooks took several hours. The next step will be to cut out the patterns, apply them, and to start cutting some wood.