Atakebune were the largest class of purpose built warships that were used by the Japanese clans during the Sengoku period, or the Warring States period. These ships ranged from around 30 to 50 meters in length, were equipped with a large, box-like structure. Inside were the oarsmen, foot soldiers and samurai, protected by the wooden walls. The structure had two or three levels, with the top level being the roof of the structure. Firing and viewing ports were cut out and may have been closable with a hinged cover. 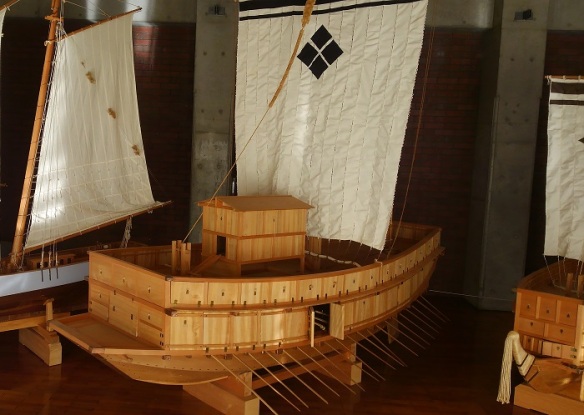 Atakebune model at the Verkehr Museum in Shizuoka.

In addition to a single-bank of sculling oars, the ship carried a large square sail hung from a single mast, usually mounted near the center of the ship. In bad weather, or when otherwise not in use, the mast could be un-stepped and lowered across the top of the ship. Usually, the ships were equipped with three sets of supports that the masts laid across.

Some ships carried a heavily constructe deck cabin that sat of the roof level of the ship. Some unusually large atakebune, referred to as an o-atakebune, carried castle-like structure atop.

The topic of the atakebune came up recently, as some preople on the Internet have expressed an interest in building a model of one. Unfortunately, there are no serious atakebune kits available. One hope is that the Japanese wooden model manufacturer Wooy Joe might be convinced to add an atakebune to their traditional Japanese ship model kit liine up. I understand that they have actually looked into the possibility, but they have not been able to locate suitable plans of atakebune that are historically accurate enough.

So, Kazunori Morikawa, who owns and operates the Japanese online hobby shop Zootoyz.jp, and I have been discussing the topic and we’ve been on the hunt to collect what information we can.

Now, there are some published drawings of atakebune in the books of late Professor Kenji Ishii. I’ve looked over these closely, and they are very good drawings. However, they lack a scale, and they provide only a side profile with one station drawn in, showing the shape of the hull at that point. The problem is, it doesn’t identify the center line of the station, so there is no telling how wide it actually is. Also, only one station is not sufficient to recreate the shape of the ship. Add to that, a lack of a top or deck view, as well as the lack of any other specific details, and the drawing because just a way to compare rough hull types.

Besides Professor Ishii’s books, there are other sources of information on atakebune on museum websites, individual blogs, and in other books on Japanese warships. One book that comes to mind because it is written in english, is the small paperback book Fighting Ships of the Far East (2): Japan and Korea AD 612-1639, written by historian Stephen Turnbull.

Now this book is handy and its got nice artwork and some description of the different Japanese fighting ships. It also gives an excellent summary of the history and use of them. But, I think the books small form factor leads to a great generalization of the type, Of course, considering it’s just about the only english language introduction to the subject, it’s an important work.

Given the limited published resources, what can one do if they are interested in building a model of an atakebune, or any other Japanese warship type? Clearly, museum have models of these ships – what plans are these models based on. Do sufficient drawings exist? Morikawa-san first brought up the question and I came in later with the prompting of a third person who really wants to build a model of an atakebune.

As I mentioned before, there are various Internet resources on the subject, most of which refer back to Professor Ishii’s work, but some include information that has been published by some museums in Japan.

One that I found particularly useful was this one in Japanese that gives a nice overview of the history of Japanese ships: https://navy.ap.teacup.com/kanzo/. If I understand correctly, the father of the site’s owner worked for Professor Kenji Ishii. If you visit the site, and you’re interested in atakebune, check out volumes 7, 9, 10, 11, 12, and 13, on pages 6 through 8. Of course, this isn’t original source information. But, that just means it’s easier to follow and understand, and there’s a lot of interesting material there.

Regarding real source material, I was directed to a website that I had visited before and somehow managed to completely forget about – probably having run across it at 2 a.m. or  something. The site is the University of Tokyo’s digital library, and it has a ton of old drawings and texts that have been scanned and are available to access for free. It is again in Japanese, but if you can navigate it, there is a lot of interest material there.

Here’s a link to top level of the Tokyo University library system, which can be accessed in english: https://www.lib.u-tokyo.ac.jp/en. The collection of interest, however, is accessed in Japanese. It is called the Komaba Library Dai Nihon Kaishi Hensan Shiryo (大日本海志編纂資料), and here’s the link: https://iiif.dl.itc.u-tokyo.ac.jp/repo/s/kaishi/page/home.

The link actually takes you to a search. To just browse everything, leave the search box empty and click the magnifying glass search button to the right of it. Before I found this particular collection, I’d been digging through another collection, which turned up some drawings that Professor Ishii had obviously used in his books. But, this was the first time I actually saw completed and detailed images of the familiar atakebune. And, I noticed that some of the images actually had numbers on them, indicating measurements, so I knew this was an ideal find. That, plus the fact that all the drawings I’ve found seem to be in scale.

It was when I was looking more closely at the measurements, that I realized that the numbers didn’t quite make sense to me. Then, it struck me that these aren’t measurements of the actual ship, these are apparently model measurements. These atakebune drawings were actually model drawings. And, it looks to me that these were the same ones used to build some of the models we see today. Either that, or these were used to record the measures of some existing models. The problem at the moment is that I’m not sure of the ages of these drawings. But, so far, this is the closest I’ve found to usable model plans for arakebune.

Since these are model plans, the search continues for actual atakebune drawings with enough information to model from. But, in the meantime, this is a very positive find that I’m very happy about. I’ll post again about the search. Morikawa-san is now following a lead on a very rare book, and I’m going to be posing some questions to the wasen study group, headed by Professor Kon of Kanagawa University. Ω