Not sure how I missed this, but back in 2012, a ship modeler on an Austrian website researched and built a model of the Naniwamaru, one of four replica Japanese coastal transports at the time. 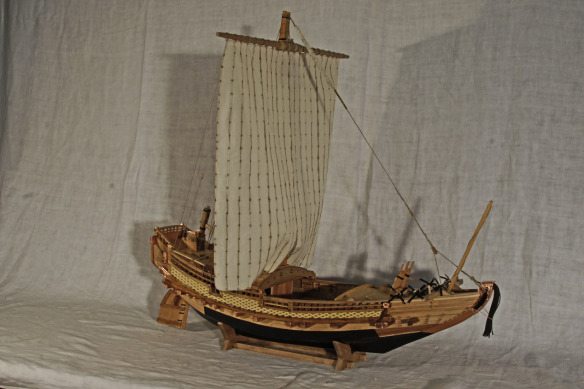 Mr. Luh had contacted American boatbuilder Douglas Brooks, who had written an article on these ships, generally called bezaisen or sengokubune, in the the Shipwright annual for 2011.

The construction of the model is detailed on the modeler’s website here: http://www.googlehupf.at/shipwright/?page_id=276

I’m always very impressed by ship modelers who build models of Japanese watercraft with limited information. The only thing odd in the model is the narrow strip planking of the lower hull, but this is covered by the paint job anyway.

I couldn’t find mention of the scale of the model, but it’s pretty big. I’m guessing it’s about 1/50 scale, as the 30 meter long ship (give or take) looks to be about a 2 foot long model (give or take).

Anyway, it’s a very nice model and there are a lot of great construction photos on his website. Definitely worth checking out. Ω

1 thought on “A Naniwamaru Build in German”