Skip to primary content
An update on this model is long overdue, and while I haven’t really been working much on the Kobaya model, it is a model that I’ve been very happy with. I’ve recently been researching old drawings, looking for atakebune information, but mostly finding sekibune and other small ships. As a result, I’ve found something of a renewed interest in finishing my kobaya model, and started working on it again.

The model keeps inching closer to completion, with the biggest hold-up being the making and mounting of the ship’s 28 sculling oars. Given the size of a person on the model, the deck would have been crowded with oarsmen. With such a sharp hull and relatively small size (17m) in comparison with the largest of ships at the time (30m, give or take), those 28 oars must have made her very fast.

However, Japanese sculling oars are more complicated in shape than western-style oars, so this project involves cutting and shaping 56 pieces of wood, plus the addition of bindings, handle, and mounting yoke onto each oar. So, I have my work cut-out for me.
But, as you can see, I have all the parts cut out and I’m in the process of shaping them now. Once I got started, the process moved along pretty quickly, though I still have a lot of work to do on them.

In the meantime, I managed to solve one of my long-standing detail issues, one of many things on the model that I’ve been contemplating and staring at for many months, and that is the bird decorations at the bow.
Paris shows what are probably a pair of phoenix (anyone know the plural of phoenix?). In Japanese art, birds are generally drawing with the wings sweeping downward, which is illustrated in the Paris drawings. I tried to mimic this, but they ended up being raised up slightly. I don’t think it was a design problem as much as it might have been an application problem. However, I think I’ll leave them alone, as they are very small and I don’t want to risk messing them up. 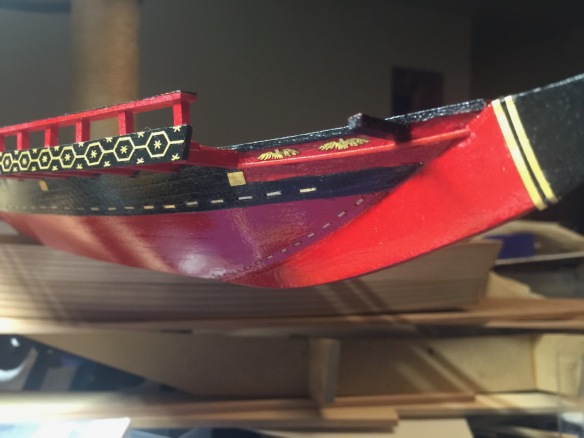 As with the other gold decorations on this model, I drew up the phoenix using the Silhouette Studio software for my Cameo 3 vinyl cutter. It took me a few attempts to come up with something that looked like it had some detail, and you’ll notice the feathering of the wings. Initially, the wings were solid and looked very two-dimensional, so I’m happy how these turned out, especially as each one is only about 1cm across (13/32″).
As with other decorations, the vinyl was treated with sizing and then gold leafed before applying to the model. There is one more small decoration just forward of these, but it’s very hard to decipher. To me, it looks a lot like a cursive letter ‘P’, which would make no sense. The museum model in France, if you recall from my previous postings, is at the Musée national de la Marine, and that model has what looks like a rotated letter ‘S’. I’ll be working on that later, as I ran out of gold leaf and had to order a little more for that feature, so I have a little time to think about it.

In the meantime, you might notice that I added a strip of molding at the bow, just under the phoenix, to match the drawings. I was initially confused too about the square that appears just forward of the birds. This represents the end of the small beam at the bow. On other drawings it appears as black, but on the side drawing, it is clear.
At first, I thought this would suggest a discrepancy as the drawing here indicated that the beam should be red. However, I now realize that this could also mean that the end of the beam should in fact be gold, like the ends of the other beams. Why I did not catch this before, I don’t know. So, that’s another thing I’ll be working on once the gold leaf arrives. 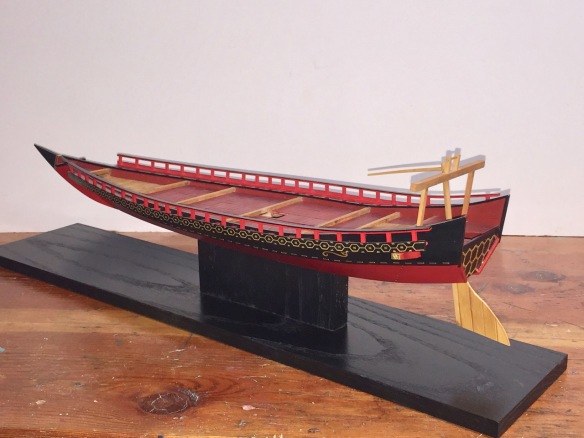 There will be a few more additions and modifications I’ll be discussing in more detail next time. Plus, I’ll be making a final decision regarding the addition of speculative features.