Model on exhibit at Kanagawa University. Photo by Masami Sekiguchi.

No, that’s not my model. This 1/10-scale model of a Kamakura period umi-bune is on display at the Kanagwa University, which is home to the Institute for the Study of Japanese Folk Culture. The photo was taken by my friend Masami Sekiguchi, who is one of two Japanese ship modelers I met with in Tokyo last September. The other is Norio Uriu, Both gentlemen are members of The Rope, the Japanese ship model society in Tokyo.

I had been corresponding with Mr. Uriu for over a year, as he is a friend of fellow ship modeler Don Dressel of the Ship Modelers Association in Fullerton, California. Don was building his model of a Higaki Kaisen at about the same time I was building mine, and at some point, he put me in touch with his friend in Japan, Mr. Uriu.

When I travelled to Japan, I made arrangements to meet with Mr. Uriu for dinner in Tokyo and he brought along his daughter Hanako, who helped with our discussions, and Mr. Sekiguchi, who has been helping me understand information on Japanese ever since.

Mr. Uriu actually got myself, Mr. Sekiguchi and Jean-Pierre Mélis together, as we were all interested in the subject of wasen. Mr. Sekiguchi is a long-time member of the Rope and the Yokohama Sailing Model Club, where he served on the executive board for 14 years. I’ve mentioned Mr. Mélis before on my blog as he’s been writting a 4-part series on a look at traditional Japanese boats through paintings in the Neptunia, which is the Journal of the Friends of the French National Maritime Museum. The three of us exchanged many emails on the subject of wasen, as I work on my wasen models and Mr. Mélis writes his articles, the third of which should be appearing the March/April issue of the Neptunia. 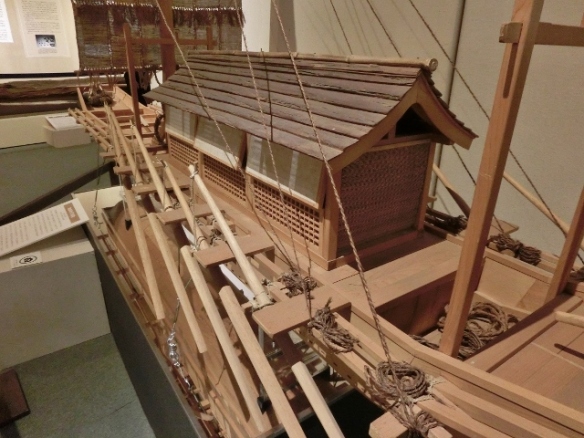 Another view of the Kanagawa University model. According to Mr. Sekigushi, the model was built by the late Yuichiro Kondo, a third-generation boatbuilder from Yaizu, and maritime researcher. Photo by Masami Sekiguchi.

Regarding the large umi-bune model at the Kanagawa University exhibit, this is is very similar to what I’ve been working on, and would represent the same type of boat. The 1/10-scale model on display varies only slightly from a pair of 1/20-scale models I have photographs of. One set of photos of the 1/20-scale boat were sent to me by Douglas Brooks, the other set of photos is from the Nippon Foundation Library website. The 1/20-scale models are nearly identical, though one is rigged and the other is not. I suspect they may have been built by the same person or persons.

1/20-scale umi-bune model being prepared for exhibition in Kobe. Photo by Douglas Brooks.

One of the issues I’m looking at is that if you look closely at the 1/20-scale model photos, you may notice that the roof boards are short and run from the peak of the roof out to the sides. With the large 1/10-scale model and models of medium-sized version of the ship, the roof boards run the length of the yakata. Now, this may seem a minor issue, but it affects the underlying structure of the roof. Also, I don’t know that they’d both be correct for the exact same ship. Different time periods, maybe? It’s just another one of those things that I’ll have to make my own call on.

Closer look at the umi-bune in the Kitano Tenjin scrolls.

As you’ll see next, I’ve just about run out of time to decide, as I’ve completed the basic framework of both the large and small deck house structures.

Now, I should point out that I’m pretty much “winging it” when it comes to the structures. I’ve examined images of traditional Japanese carpentry and structure, and looked over my photos of houses from the Edo-period, though that’s 300 to 500 years later than this boat. I think this is basically what I’m seeing in the museum models, and I think it, more or less, works.

I feel that I’m cheating, to a certain extent, as this is all going to be covered over by a roof, and the internal structure won’t be so noticeable. At 1/50 scale, the first issue I ran into was that these are very flimsy structures as glued together, and the only way I could keep them from falling apart was to drill out the joints and insert steel wire “pins”. These are hidden by the beams I added. It seemed odd to add beams on top of beams, the way I did, but I didn’t really see how else I could support the roof otherwise.

For the lower walls of the long yakata, I wasn’t sure what the texture in the drawings represented. They looked almost like simple rectangular lattice work, and I considered make them very similar to the way they are on the photos of the large model that Sekiguchi-san sent me. The Kitano Tenjin paintings didn’t seem very clear on this and it seemed to look like the walls were really entirely just a drape or maybe a roll-up screen. But, I tried to follow the drawings I’ve been using, which suggest these lower panels.

Considering they might be some kind of wicker work, at this scale, I just decided to cut a pattern using a knife. I stared by making very narrow strips of hinoki on my table saw. Basically, cutting them as narrow as I could manage. I glued these up, side-by-side, onto a thin backing board, and trimmed the piece to fit into one of the openings. For no particular reason, I used sugi, or Japanese cedar, for the backing board. I then cut lines perpendicular to the narrow strips. I was going to for a weave pattern.

As you can see, I also added the support posts on either end of the long yakata. I don’t know this for sure, but these seem to be present to allow the crew to easily stow the mast and sail gear out of the way. Also, the umi-bune in the Kitano Tenjin scrolls has a lantern hanging on a pole, which is attached to one of the forward posts, probably lashed to it. I imagine that nobori, or vertical banners flown by a daimyo’s vessel, would also have been lashed to these supports as needed.

Regarding the mast and sail, there is just the one mast, but the sail is supported by the yard at the top and a spreader at the foot. Basically, these are just two poles, probably identical. Because of the stiff nature of straw matting, sails weren’t furled on these early sailers, but were rolled up, and they had to be carefully handled, as they would become extremely heavy if they got wet.

The Kanagawa University model shows straw mat sail as being made up of separate panels that seem to be tied together at the edges. Photo by Masami Sekiguchi.

At some point, I’ll make a sail for my model, but I don’t know that I’ll have time before the model is displayed at the Japan Center Mall as party of my next Japanese boat models display in March. A while ago, I purchased a sample piece of a very coarse weave cloth that I think will work well for my model. I don’t know if I’ll tie the panels together like was done on the Kanagawa University model, though it looks very interesting. More likely, I’ll just sew in the stitching in a large grid pattern to simulate the panels. I’ll have to experiment with it a little to figure it out.

You’ll note in the above photo, I added the stern deck. I decided to simply use the natural ledge created by the overlap in the bulwarks planks to support the deck. I had done this at the bow as well. Again, I don’t know if this would be accurate or not. One issue is that those beams under the rails at the sides are set into the hull, but stop there. All other beams run all the way through the hull and out the other side. I didn’t see any sign of that in the models and drawings. However, it is possible that these rails at the stern should actually be sitting lower that they do on my model. If I do another model of this type, I’ll be revisiting the design here.

You’ll also see that I added the rowers’ platforms and support beams for the oars to push against. It took me a while to get comfortable with how these boats were rowed, and I still have questions about this. I’ve reviewed paintings and even the Battle of Dan-no-Ura sequence in the movie Kwaidan to wrap my head around this. The drawings of the Umi-bune showed some very flimsy looking beams that the rowers would pull hard against, and I just didn’t feel comfortable with how fragile they looked, so I used slightly heavier beams.

Based on the scroll paintings, the platforms in the drawing, and consequently on my model, seem awfully small too. I really need to see some figures on the model and to play with some oars to figure out how they would have rowed. One of the issues I have is how they rowed. Sculling oars are generally used with the rower facing forward. In all the early paintings, the rower is commonly seen facing backward, like a western rower.

The Kanagawa University document on the Kitano Tenjin scrolls, that I mentioned in a previous post, suggest that the kind of oars shown could be used like a pole to push the boat along as well as used like a paddle. If you look at the painting above, clearly, they’re not sculling –They seem to be pulling against the water, like a western-style oar. If they were polling along, I don’t know if it’s possible to get leverage against the bottom of a river or shallow sea floor that way. So, I’m guessing that they are rowing, western-style.

Yesterday, Sekiguchi-san gave me a new piece of information that might help research this a bit more. Already known, is that the Japanese word for oar is “ro”. Sekiguchi-san explained that there are two types of ro in Japan, a sao-ro and a tsugi-ro. The tsugi-ro is a two-part ro, with a head set at an angle to a long blade. The sao-ro is a pole type and is the type that would have been used on the ships shown in the Kitano Tenjin scrolls. I’ll probably be thinking about this a lot in the next week or two, as I want to add the oars to my model. So, I’ll be discussing this more in the future.

The last thing I’ll mention here, is that I finished the mast support, adding the side pieces shown above. So far, I have no idea what the stair-step shape is for. It may serve as a rest for the sail spreader. Perhaps to keep it from flapping around, perhaps lines attached to the spreader are pulling back hard and hold the spreader against this support. Possibly, the yard is lashed to the mast support or to the beam behind it.

This is the only thing that make sense to me, but it would require the bottom of the sail to sit very low to the deck. If you look at the Kanagawa University model, the sail is mounted way too high, or the mast is too long, for this to work. But, perhaps that’s an error in that model. I’ll have to examine more paintings regarding this.