I completed what I believe is a good final draft of the Tenma-zukuri Chabune from the Funakagami, and I’m now working on my model. However, it appears that I am already late to my own game. Model builder Kouichi Ohata has already completed his model in 1/10 scale, and he’s done a beautiful job with the boat as well as with all the added details!

With the help of fellow modeler Kouichi Ohata and my mentor Douglas Brooks, I’ve gone through several revisions of the plans – seven major ones, so far. 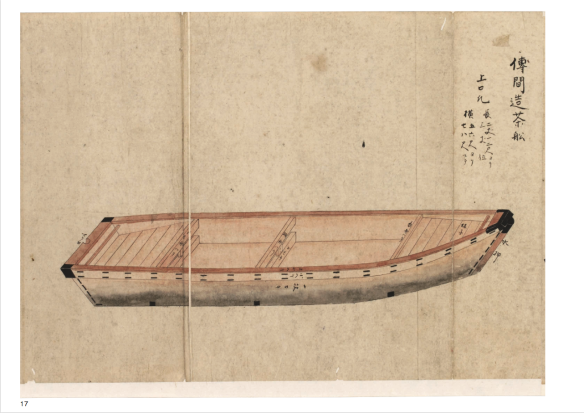 Also, if you look at the near side of the boat, particularly the bottom, it doesn’t appear to show any inward curvature. This threw me initially, as this is, again, pretty unusual. It’s not impossible, as the hozugawa boat I built doesn’t have any inward curvature at the stern either. But, looking more closely, at the far side, you can clearly detect inward curvature at the stern. The lack of curvature had bothered some people, so I’m glad I could spot some in the image to justify it on my drawings.The downward pitch of the small decks at the bow and stern were curious but I’ve seen this before, and Douglas Brooks confirmed it is a common feature on many traditional Japanese boats. The Tenmasen model that his teacher built and gave him shows this same feature, though I have not been able to ascertain if the stern deck pitches down, or if it only looks that way, as the hull shape rises at that end.

Models built by Douglas Brooks’s teacher, Mr. Kazuyoshi Fujiwara. In the back is his 1/10-scale Tenmasen. The pitch of the decks fore and aft can be seen clearly.

So the question of the flat bottom still remains. Is this a mistake in the Funakagami book? If so, then seven other images are mistakes as well, while all the other boats illustrated in the book clearly show rising sterns.

I’m not one to discount a historical record like this, but I am getting some push back on my flat-bottomed drawing. Is it possible that this is an old style of construction that disappeared during Meiji or Shōwa periods? Or is it just laziness or mistake on the part of the illustrator and just plain wrong?

I’m hesitant to ignore the historical evidence of the Funakagami. However, in response to  comments that a perfectly flat bottom creates drag and may be harder to steer, I’ve added a very slight curvature to the bottom. It’s almost imperceptible, so it doesn’t appear to conflict with the Funakagami illustration.

The other possibility is that the slight curvature should be replaced by a flat bottom with a hard upward angle near the stern. I’ve built many other models where the stern is like this, and this seems to be very common and can be seen on most of the boats in the Funakagami. However, as I’m trying to reproduce what is illustrated in the Funakagami, I am again hesitant to make such an obvious “correction” to it. 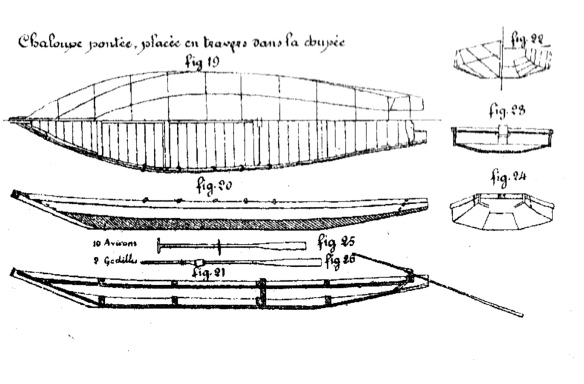 A Tenmasen as recorded by A. Paris in 1868 that shows a flat bottom that angles up at the stern.

I’m very close to completion of the main drawing, but I want to work out details, like the locations of the mortises in the Todate, or transom, and in the Shiki, or bottom. Pushing ahead, Mr. Ohata has worked out these details on his model, and I may take a cue from his work here.