First off, my apologies for taking so long to post an update on this project. The Tenma-zukuri Chabune is actually done. It sat for a long time with all the construction work done, needing only the coppering detail. I finally got the nerve to get back to it and it is now finished. But, when I last posted, there was still work to do, so let me take a step back to go over what was done.

Last we left off, the nail mortises had been cut and I was ready to add the decks at the bow and stern, or the omote and the tomo.

I don’t know if the boards that make up these decks were removable. Underneath, I left the ends open, so things could be tucked in there for storage, but only for smaller things, as the support posts of the beams cut the openings in half. If the deck beams were removable, there should be finger holes in at least some of the deck boards, so they could be easily lifted up. Sometimes, there was also a V-shaped pattern inscribed across the boards to make it easier to identify which boards go where. This is less important at the bow, where the boards lengths vary greatly, making them more easily identifiable as to which one goes where.

At 1/20 scale, I decided to keep things simple and didn’t add either finger holes or the alignment inscription. This would be more important on a larger scale model, like 1/10 or 1/15. So, adding the deck boards was just a matter of laying them down.

END_OF_DOCUMENT_TOKEN_TO_BE_REPLACED

This Woody Joe kit does not include a tenmasen, which is the small ship’s boat used for transferring crew and cargo to and from the ship, but neither did their Higaki-kaisen kit. The tenmasen is normally carried across the deck, atop the kappa, which is the small forward cabin where ropes and sails are stored. They are used by the Higaki-kaisen as well as the Kitamaebune.

Image from a Tokyo Maritime Science Museum book on bezaisen such as the Higaki Kaisen and Kitamaebune. Note the tenmasen forward of the open main deck.

Up to now, all the tenmasen I’ve seen illustrated have been pretty heavily constructed boats, propelled using one or two ro, or sculling oars. In contrast, the tenmasen recorded in the Paris illustrations is very wide and flat, appears somewhat lightweight, with a shallow draft, and is equipped with a pair of sculling oars, as well as 10 paddles, which are used much like western-style oars.

END_OF_DOCUMENT_TOKEN_TO_BE_REPLACED

I also added the uwakoberi, which is what in the west, one would refer to as the gunwale or caprail. Each was made from a single piece of wood, wide enough to cover the edges of the hull planking and rub rail. I made mine a little wider, so that there is a slight overhang on the inboard side.

On tenmasen, the uwakoberi could be quite wide, serving as a walkway for the boatmen. I wanted to keep true to the Funakagami print, so I didn’t go too wide on this. Also, I had a hard enough time putting a bend in the wood. Any wider would have just made this task more difficult.

END_OF_DOCUMENT_TOKEN_TO_BE_REPLACED

Construction of the model continues as I’ve been working out how I want to tackle some of the details on this 1/20-scale model. The major issues to deal with are the copper mortise covers and other copper detailing as well as the detailing of iron nails used to fasten the koberi, or rub rail, plus wire nails used to fasten the uwakoberi, or the caprails. Some of this is quite simple. 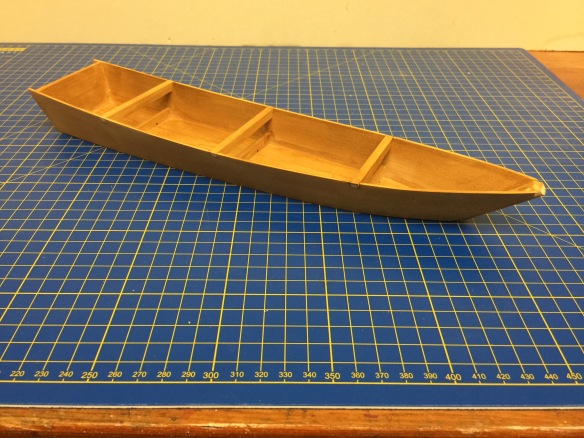 Below, I’ve posted a photo of Japanese modeler Kouichi Ohata’s Tenma-zukuri chabune. He has been helpful in the adjusting of the design of the drawings and has completed a model based on the drawings.

His model is built at 1/10 scale. I may eventually build one at this scale, but for now, I’m happy building mine in 1/20 scale, and I’m considering building other wasen of the Funakagami in 1/20 scale also. It saves on space!

Photo of Japanese modeler Kouichi Ohata’s 1/10-scale Tenma-zukuri chabune based on my plans, with a few modifications and added details.

END_OF_DOCUMENT_TOKEN_TO_BE_REPLACED

In my last post, I discussed the building of a tenma-zukuri chabune from the Funakagami, and I stated that I was working on my model, but didn’t actually talk about building the model. The fact is that I wasn’t sure about what scale to build it at, given that a 1/10-scale model would end up being a little over two feet long, and I’m running low on space to display or store my models. So, I started a 1/20-scale model to see how I’d feel about the smaller scale.

I began by making a temporary internal frame. This would allow me to build the shiki, or bottom, and add the miyoshi, or stem, and the todate, or transom, at the proper angles. The same goes for the tana, or hull planks. 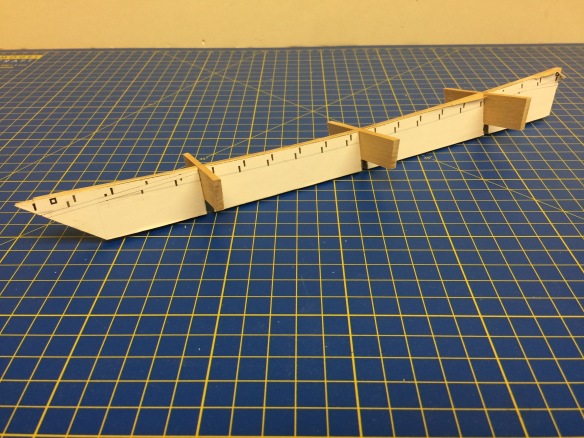 The longitudinal member of the framework is shaped directly from a copy of my plan drawing. The cross pieces are located at positions of the funabari, or beams, and are shaped according to my drawings.

END_OF_DOCUMENT_TOKEN_TO_BE_REPLACED

I completed what I believe is a good final draft of the Tenma-zukuri Chabune from the Funakagami, and I’m now working on my model. However, it appears that I am already late to my own game. Model builder Kouichi Ohata has already completed his model in 1/10 scale, and he’s done a beautiful job with the boat as well as with all the added details!

With the help of fellow modeler Kouichi Ohata and my mentor Douglas Brooks, I’ve gone through several revisions of the plans – seven major ones, so far.

The biggest difficult has been in analyzing the single wood-block print of this type. Compared to other boats in the Funakagami, this one has a very flat bottom, showing no real rise at the stern, which may be possible, but it’s really throwing people, as it seems very unusual for a Japanese style boat. END_OF_DOCUMENT_TOKEN_TO_BE_REPLACED

Work on the drawings of the Tenma-zukuri chabune continues. Over the past months, I’ve been making changes to my drawings of this wasen that I found in the the Funakagami. With the help of fellow modeler Kouichi Ohata and my mentor Douglas Brooks, I’ve gone through several revisions of the plans – seven major ones, so far.

END_OF_DOCUMENT_TOKEN_TO_BE_REPLACED

Back in March of this year, I was digging through the images of the wasen recorded in the Funakagami. This, as you might recall, is a book put together in 1802 to identify the different boat types in use on the waterways of Edo for tax collection purposes. 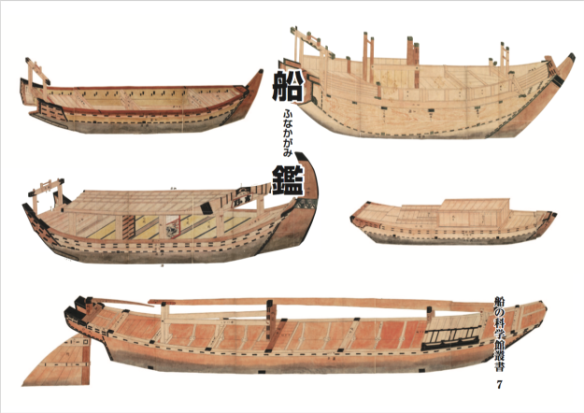 There was an excellent short article that appeared in issue number 82 of The Rope News about a talk given in 2014 by Mr. Iinuma, who was the curatorial director of the Museum of Maritime Science in Tokyo. The talk focussed on the Funakagami and the boats described in it. Here’s a link to it if you haven’t seen it: The Rope News, No. 82

I’ve been looking over the 33 boats shown in the book, trying to find a subject that I felt I could model. Unfortunately, I’ve found no technical drawings for any of these boats. But, there was one that piqued my interest, as it’s name became more meaningful as my Japanese language skills improved. That boat was the Tenma-zukuri Chabune. END_OF_DOCUMENT_TOKEN_TO_BE_REPLACED

While I have been in touch with boatbuilder Douglas Brooks by email for close to 3 years, we met at the Nautical Research Guild’s annual conference in Mystic, CT, in the Fall of 2016, where he gave a talk on Japanese traditional boatbuilding and his apprenticeships.

At the conference, he had a pair of models that were built by his teacher in Japan, Mr. Fujiwara. These were beautifully made and I’ve been inspired by them.

The smaller one is a chokibune, an Edo period water taxi, built at 1/15 scale. The larger is a tenmasen, a cargo lighter, also Edo period, used for carrying goods to and from the large coastal transports, commonly called sengokubune. The tenmasen model is built at 1/10 scale. 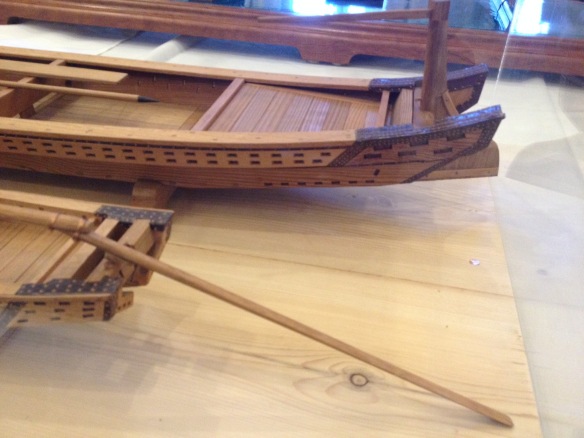 The construction of the chokibune is described in detail in Douglas Brooks’s book, but the tenmasen was built by he and his teacher after he completed his apprenticeship and only a few photos of it appear in his book. But, the tenmasen is a fairly simple design, and should be easy to construct, and there are other similar wasen found in the funakagami.

I’m hoping to score some information from Mr. Brooks, but I don’t know how much he has in the way of notes and photos. Keeping my fingers crossed. Ω