I’m now in the final stages of the building of Woody Joe’s Kitamaebune model kit. I’m working on the sails and rigging and dealing with a few small remaining details.

The kit sails are very nice, and have the sail seams and lacings printed on them. From a normal viewing distance, they look great, and I’ve gotten compliments from those who glanced at them and thought I’d stitched them. But, I’m going to need a main sail as well as one at the bow and I want them to match. The only way to do that is to make them both.

The big issue is that I’d love to be able to detail the Japanese-style sails, which are made of separate panels that are laced together. The design is such that the sails are effectively self-reefing, so that they spill the wind when it gusts. This design is more apparent on sails of smaller vessels, and I don’t know if the lacing between all of the panels are that way, or just between the four large groups of panels. But, you can see the idea in a pair of photos from ModelShipWorld member marcjp, who lives in Osaka, Japan, and took these photos of the museum ship Naniwa Maru. 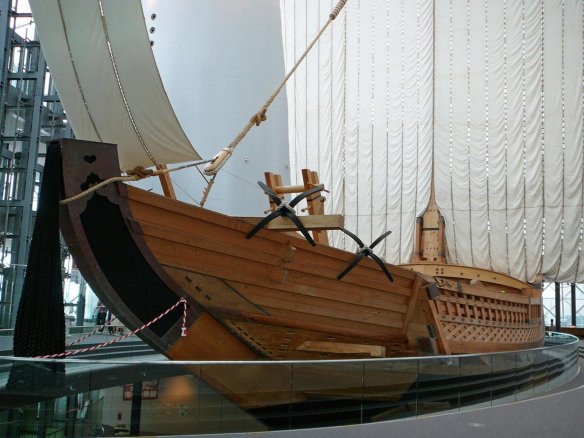 I don’t think I’m going to be able to really simulate the sails at this scale the way I’d like to. I may just end up stitching all the seams. Even at a big scale, like the model I photographed at the Sea Folk Museum in Toba, Japan, you mostly get a sense that the sails are different from western sails. 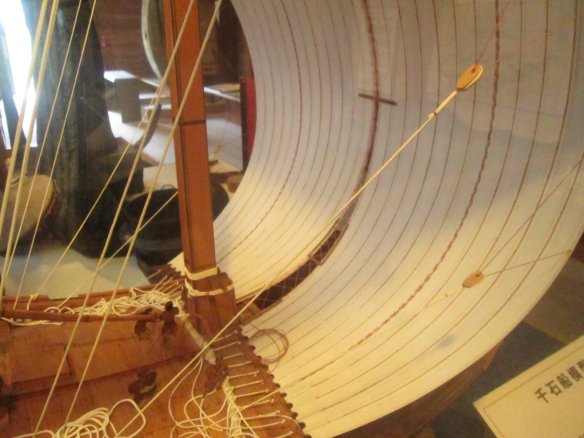 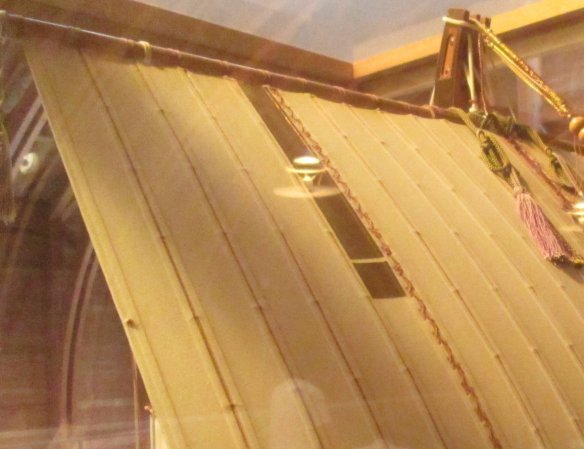 I don’t recall exactly, but I believe this was from a 1/30 or maybe even a 1/20 scale model. My 1/72 scale model is just too small to do a nice job like that, so we’ll see what I manage. Right now, I’ve sewn the seams of the sail cloth, and attempting to simulate the lacing between the four panel groups – something like what you see on the model in the above photos.

One additional feature that I want to add are the black cloth pieces on the sail. These geometric patterns identify the owner of the ship. Something you see specifically on kitamaebune. These don’t appear on Higaki Kaisen, as those ships were all operated by the Higaki trade guild and were identified by the diamond shaped lattice work on their hulls. 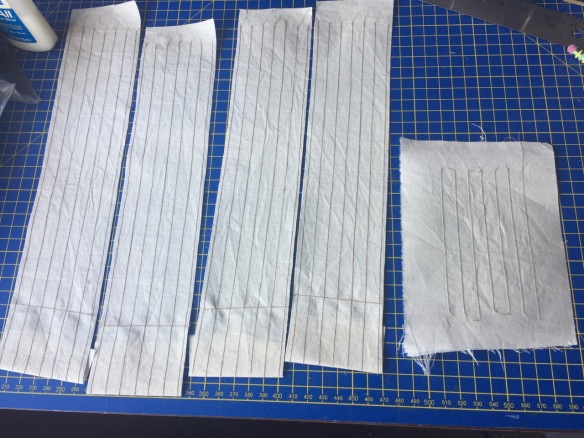 With all the work I’ve done on the sails, I’m already considering this to be a practice set. The cloth I chose is a pretty dull color. I don’t know why, but I’ve never seen a Japanese sailing craft depicted with dirty gray sails the way you see most sailing ships with cloth sails. This may just be a matter in Japan of not wanting to represent a ship in less than new condition. Or, maybe the Japanese boatmen took pride in their ships and cleaned the sails regularly, unlike on western ships.

I don’t know what the truth is, but my off-white sails just look out of place. So, I may just end up making a new, whiter set of sails. I’ll continue with this set of sails and maybe it will be a practice set. We’ll see. For now, I’ll treat them like they’re the final set.

In the meantime, there were a couple small details I dealt with. To begin with, I made a pair of tassles, which will hang over the front of the main yard arm. These are just bundles of thread with another line looped around the center, where the threads are folded over, and another loop tied around the top of the bundle, forming a head.

I used a fairly thin polyester thread for these. This was actually my second try. For the first ones, I used thread that was too thick and they just didn’t look right. I think the thread in these final tassels are a bit on the thick side too, but at this scale, they were abouit as good as I was going to get.

Another detail I finished was part of the kit, and it’s the restraining rope that goes around the rudder post, just below the tiller. My rudder hangs in place, but the lines attached to it want to pull it upwards and push the tiller downwards. I made sure this rope is tight enough to prevent this from happening.

One more custom feature I’m considering adding is a line that fits through a hole in the top of the rudder itself. That line is tied up to the rail at the stern, and I expect it’s to help lift the rudder up out of the water. I’ve seen this on replica ships, but those ships were not in the water, and it’s possible it was just added as a convenience to help hold the rudder up off the ground.

The main concern I have is that the presence of such a line might have interfered with the movement of the rudder. But, perhaps with such an enormous rudder, the lines actually helped hold the rudder on a course? I haven’t added that detail yet. I have to think about it for a bit first.

Next time, we’ll see how the sail making goes…